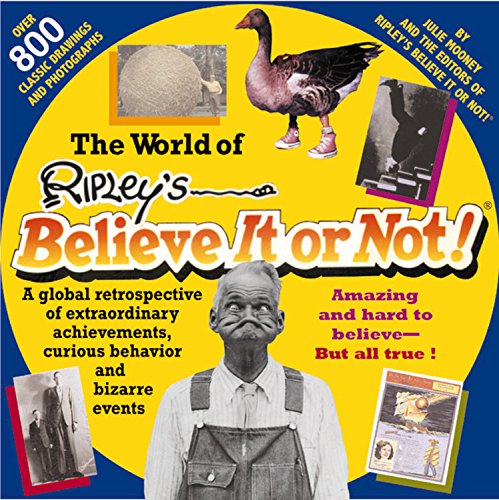 The World of Ripley's Believe it or Not
by Julie Mooney

Used Price
inc. GST
Free Shipping in Australia
The full-color, oversized format and round trim of this book make it a suitable package to display the bizarre findings of Robert Ripley, who traveled to 198 countries to research his famous newspaper cartoon strip. 800 illustrations & photos.
Reviews:
Trustpilot
Very Good

The World of Ripley's Believe it or Not Summary

The World of Ripley's Believe it or Not by Julie Mooney

It's shocking but irresistible. The fantastic and amazing World of Ripley's Believe It or Not(R) uncovers and relates curiosities from around the globe. Its full-color, oversized format and round trim make it a suitably remarkable package to display the bizarre findings of Robert Ripley, who traveled to 198 countries to research his famous newspaper cartoon strip.

Starting with his first drawing in 1918 and the first Ripley museum in the 1930s, this book is filled with examples of human oddities, exotic artifacts, strange happenings, unusual inventions, marvels of nature, extraordinary achievements and coincidences. Readers will be amazed by the truly macabre world that Ripley captured. Hundreds of photographs show the real people and things that inspired the famous drawings. Exotic objects and human feats stretch the limits of the mind, body and imagination.

Here readers will meet world champion chicken picker Buck Fulford who could catch, kill, cook and eat a chicken in less than two minutes; Alice Penfold who could lift her sister Mary on a stool using only her teeth; "Three Ball Charlie" who could put a tennis ball, golf ball and billiards ball in his mouth and still whistle; and Liu Ch'ung of China who has double pupils in each eye.

Customer Reviews - The World of Ripley's Believe it or Not

Robert Ripley began creating his fascinating and immensely popular cartoons in 1918. Today, Ripley Entertainment continues this tradition with 26 museums around the world.

Julie Mooney has written many books, including Black Dog's bestselling The World of Ripley's Believe It or Not!

CIN000245364
The World of Ripley's Believe it or Not by Julie Mooney
Julie Mooney
Used - Very Good
Hardback
Black Dog & Leventhal Publishers Inc
1999-10-01
160
1579120881
9781579120887
N/A
Book picture is for illustrative purposes only, actual binding, cover or edition may vary.
This is a used book - there is no escaping the fact it has been read by someone else and it will show signs of wear and previous use. Overall we expect it to be in very good condition, but if you are not entirely satisfied please get in touch with us.