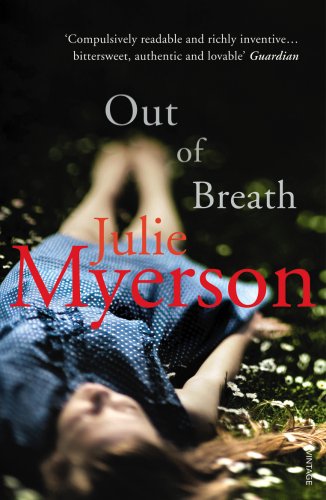 Out of Breath
by Julie Myerson

Used Price
$16.49
inc. GST
Free Shipping in Australia
Flynn is a thirteen-year-old girl caught between her violent, out-of-control brother, Sam, and her mother, who is struggling to cope. And then, one impossibly hot night, a strange half-feral boy called Alex turns up at the bottom of Flynn's garden.
Very Good Good

Out of Breath Summary

Out of Breath by Julie Myerson

Flynn is a thirteen-year-old girl caught between her violent, out-of-control brother, Sam, and her mother, who is struggling to cope. And then, one impossibly hot night, a strange half-feral boy called Alex turns up at the bottom of Flynn's garden. Alex is one of three runaways; there's also Diana, who has just had a baby, and Mouse, who is only six and already an accomplished arsonist. With Flynn and Sam in tow, the rag tag group of children venture into the deserted countryside, pursued by a terrifying and unseen man. Deep in the woods, they stumble across an abandoned cottage which seems to offer refuge but soon begins to reveal its dark and terrifying secrets...

Out of Breath Reviews

"A sweetly corrupt exploration of the childhood fantasy of running away... Myerson is a beautiful conjurer of subtly disturbing atmospheres...haunting" -- Jane Shilling * Sunday Telegraph *
"A mythical rite-of-passage novel... mysterious and multi-layered" * Independent *
"Compulsively readable and richly inventive... bittersweet, authentic and loveable" * Guardian *
"Myerson is a surefooted guide along the wobbly line that separates the real from the surreal ... Myerson captures [adolescence] beautifully in Flynn's compelling voice. The opening of the novel is crisp and immediate, the prose simple and direct ...More than just a coming-of-age story, Out of Breath is a timely reminder about the importance of not growing up too quickly" * New Statesman *
"A truly original read, transcending many of the usual boundaries found in fiction" * Scotland on Sunday *

Julie Myerson is the author of Home: The Story of Everyone Who Ever Lived in Our House and nine novels, including the best-selling Something Might Happen, which was longlisted for the Booker Prize. In the words of the Observer, she 'has a talent for making the unthinkable readable. The results are riveting.'

GOR001447141
Out of Breath by Julie Myerson
Julie Myerson
Used - Very Good
Paperback
Vintage Publishing
2009-03-05
304
0099516160
9780099516163
N/A
Book picture is for illustrative purposes only, actual binding, cover or edition may vary.
This is a used book - there is no escaping the fact it has been read by someone else and it will show signs of wear and previous use. Overall we expect it to be in very good condition, but if you are not entirely satisfied please get in touch with us.