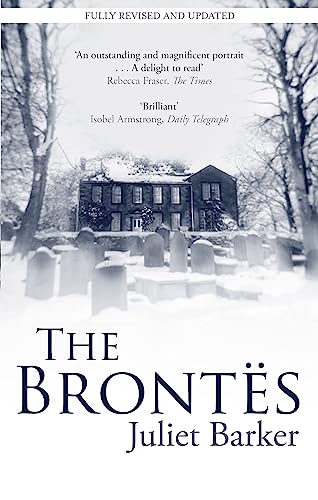 The Brontes
by Juliet Barker

The Brontes by Juliet Barker

The story of the tragic Bronte family is familiar to everyone: we all know about the half-mad, repressive father, the drunken, drug-addicted wastrel of a brother, wild romantic Emily, unrequited Anne and 'poor Charlotte'. Or do we? These stereotypes of the popular imagination are precisely that - imaginary - created by amateur biographers from Mrs Gaskell onwards who were primarily novelists, and were attracted by the tale of an apparently doomed family of genius.

Juliet Barker's landmark book was the first definitive history of the Brontes. It demolishes myths, yet provides startling new information that is just as compelling - but true. Based on first-hand research among all the Bronte manuscripts, many so tiny they can only be read by magnifying glass, and among contemporary historical documents never before used by Bronte biographers, this book is both scholarly and compulsively readable. THE BRONTES is a revolutionary picture of the world's favourite literary family.

'As a work of scholarship it is briliant . . . For those with a passion for the Brontes, or for Victoriana, or for sheer wealth of historical minutiae, it is a stupendous read' INDPENDENT ON SUNDAY

Juliet Barker is a distinguished biographer and a medievalist and scholar. She is both a bestselling historian and a critically acclaimed expert on the Brontes.

GOR002683503
The Brontes by Juliet Barker
Juliet Barker
Used - Very Good
Paperback
Little, Brown Book Group
2010-11-04
1184
0349122423
9780349122427
N/A
Book picture is for illustrative purposes only, actual binding, cover or edition may vary.
This is a used book - there is no escaping the fact it has been read by someone else and it will show signs of wear and previous use. Overall we expect it to be in very good condition, but if you are not entirely satisfied please get in touch with us.