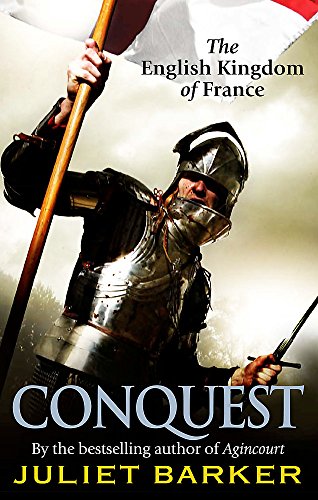 In Stock
$11.49
+10% GST
* The thirty years of English rule in France that followed the battle of Agincourt - by the acclaimed author of AGINCOURT: THE KING, THE CAMPAIGN, THE BATTLE
Very Good
6 in stock

Conquest: The English Kingdom of France 1417-1450 by Juliet Barker

Author of the best-selling AGINCOURT, Juliet Barker now tells the equally remarkable, but largely forgotten, story of the dramatic years when England ruled France at the point of a sword.

Henry V's second invasion of France in 1417 launched a campaign that would put the crown of France on an English head. Only the miraculous appearance of a visionary peasant girl - Joan of Arc - would halt the English advance. Yet despite her victories, her influence was short-lived: Henry VI had his coronation in Paris six months after her death and his kingdom endured for another twenty years. When he came of age he was not the leader his father had been. It was the dauphin, whom Joan had crowned Charles VII, who would finally drive the English out of France.

Supremely evocative and brilliantly told, this is narrative history at its most colourful and compelling - the true story of those who fought for an English kingdom of France.

** 'Juliet Barker's new book is a magnificently readable account of the last four decades of that war, and a reminder that the reality was much nastier than the myth ... Barker disentangles the dark threads to tell a story that never flags. I thought Agincourt was a superb book, but Conquest is even better. Once upon a time there was an English kingdom in France and Juliet Barker has brought it to extraordinary life' Bernard Cornwell, Mail on Sunday ** 'There was a need for a good history of the failed enterprises of the English. Juliet Barker's book supplies it handsomely' Literary Review ** 'Barker's kaleidoscopic narrative of Henry VI's reign reveals the brutal realities of medieval warfare that lay behind the chivalric ideals to which the leading men of the time paid lip service' Nick Rennison, Sunday Times ** 'This book is as gripping as its predecessor' Independent ** 'It is easy to fall in love with Henry V and his achievements rather than to question the responsibility of conquest. Barker keeps a steady head. Her prose is snappy and elegant' Evening Standard ** 'Immensely well-researched account' Financial Times Magazine ** 'Any historical novelist looking to set a swords'n'arrows actioner in a time and place not already hackneyed to death should read Juliet Barker's brilliant account' Mail on Sunday

Juliet Barker, the distinguished biographer of the Bronte sisters and Wordsworth, is a medievalist and scholar.

GOR001988773
Conquest: The English Kingdom of France 1417-1450 by Juliet Barker
Juliet Barker
Used - Very Good
Paperback
Little, Brown Book Group
2010-06-03
512
0349122024
9780349122021
N/A
Book picture is for illustrative purposes only, actual binding, cover or edition may vary.
This is a used book - there is no escaping the fact it has been read by someone else and it will show signs of wear and previous use. Overall we expect it to be in very good condition, but if you are not entirely satisfied please get in touch with us.