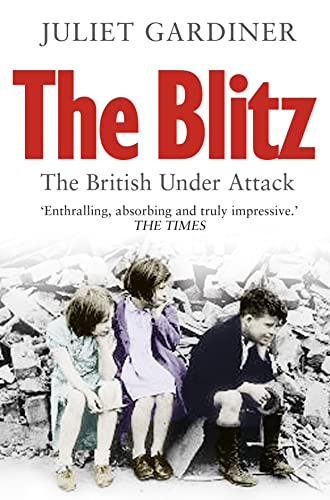 The Blitz
by Juliet Gardiner

From the author of `Wartime' comes an outstanding history of the most sustained onslaught ever endured by Britain's civilian population - the Blitz.

The Blitz: The British Under Attack by Juliet Gardiner

From the author of `Wartime' comes an outstanding history of the most sustained onslaught ever endured by Britain's civilian population - the Blitz.

September 1940 marked the beginning of Nazi Germany's aerial attack on civilian Britain. Lasting eight months, the Blitz was the form of warfare that had been predicted throughout the 1930s, and that the British people had feared since Neville Chamberlain's declaration that Britain was at war. Images of Britain's devastated cities are among the most iconic of the Second World War.

Yet compared with other great moments of that war - Dunkirk, the North African campaign, D-Day - the Blitz remains curiously unexamined. Apart from fragmentary accounts and local records, there is little in the way of a comprehensive account of the experience that so many British civilians went through - as well as the social, political and cultural implications of the bombardment. Designed to break the morale of the British population, the nightly bombings certainly did devastate. But, as Juliet Gardiner shows in this hugely important book, they also served to galvanise the nation; from those terrifying eight months, a new determination amongst people and politicians steadily emerged.

Revealing, original and beautifully written, `The Blitz' is a much-needed exploration of one of the most important moments in Second World War history.

'Enthralling...Gardiner has ranged deep and wide in the archives...her book gives us a balances picture of Britain, nationwide, throughout those wearying months. Page after page of her intensely humane prose bring tears, anger, horror, disgust and utter admiration in equal measure...an absorbing and truly impressive account of Hitler's second strategic defeat.' The Times

'Throughout the book, Gardiner makes highly effective use of the words of those who lived through the Blitz...the material [she] marshals so well underlines the stubborn powers of endurance and the genuine sense of community that the Blitz did indeed engender.It was one of the defining moments in modern British history and it wasn't only our cityscapes that were reconfigured by the German bombing. Gardiner shows how it changed people as well.' Sunday Times

`Thoughtful and considered...Through numerous first-hand accounts [Gardiner] shines the spotlight on the day-to-day realities of living under attack...It is surprising how much fascinating new material this book unearths. It is a treasure trove of vivid, detailed anecdotes, revealing many hitherto overlooked aspects of life in wartime Britain.' Guardian

Juliet Gardiner is a respected commentator on British social history from the Victorian times through to the 1950s. She was Editor of History Today magazine and is also the author of the critically acclaimed and bestselling `Wartime'.

GOR008008269
The Blitz: The British Under Attack by Juliet Gardiner
Juliet Gardiner
Used - Like New
Paperback
HarperCollins Publishers
2011-03-31
352
0007386613
9780007386611
N/A
Book picture is for illustrative purposes only, actual binding, cover or edition may vary.
This is a used book - there is no escaping the fact it has been read by someone else and it will show signs of wear and previous use. Overall we expect it to be in very good condition, but if you are not entirely satisfied please get in touch with us.