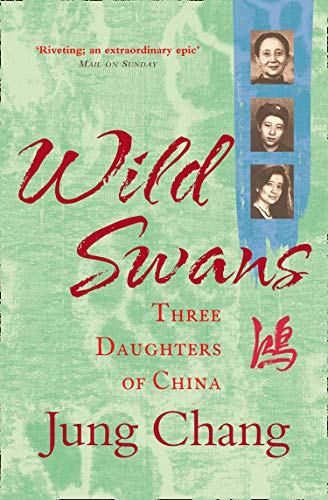 Few books have had such an impact as Wild Swans: a popular bestseller which has sold more than 13 million copies and a critically acclaimed history of China; a tragic tale of nightmarish cruelty and an uplifting story of bravery and survival.

Few books have had such an impact as Wild Swans: a popular bestseller which has sold more than 13 million copies and a critically acclaimed history of China; a tragic tale of nightmarish cruelty and an uplifting story of bravery and survival.

Through the story of three generations of women in her own family - the grandmother given to the warlord as a concubine, the Communist mother and the daughter herself - Jung Chang reveals the epic history of China's twentieth century.

Breathtaking in its scope, unforgettable in its descriptions, this is a masterpiece which is extraordinary in every way.

'It is impossible to exaggerate the importance of this book.' Mary Wesley

'Everything about "Wild Swans" is extraordinary. It arouses all the emotions, such as pity and terror, that great tragedy is supposed to evoke, and also a complex mixture of admiration, despair and delight at seeing a luminous intelligence directed at the heart of darkness.' Minette Marrin, Sunday Telegraph

'Immensely moving and unsettling; an unforgettable portrait of the brain-death of a nation.' J. G. Ballard, Sunday Times

'"Wild Swans" made me feel like a five-year-old. This is a family memoir that has the breadth of the most enduring social history.' Martin Amis, Independent on Sunday

'There has never been a book like this.' Edward Behr, Los Angeles Times

Jung Chang was born in Yibin, Sichuan Province, China, in 1952. She was briefly a Red Guard at the age of fourteen, and then a peasant, a 'barefoot doctor', a steelworker and an electrician. She came to Britain in 1978, and in 1982 became the first person from the People's Republic of China to receive a doctorate from a British university. 'Wild Swans' won the 1992 NCR Book Award and the 1993 British Book of the Year. She lives in London.

GOR004153597
Wild Swans: Three Daughters of China by Jung Chang
Jung Chang
Used - Very Good
Paperback
HarperCollins Publishers
2012-03-01
720
0007463405
9780007463404
N/A
Book picture is for illustrative purposes only, actual binding, cover or edition may vary.
This is a used book - there is no escaping the fact it has been read by someone else and it will show signs of wear and previous use. Overall we expect it to be in very good condition, but if you are not entirely satisfied please get in touch with us.