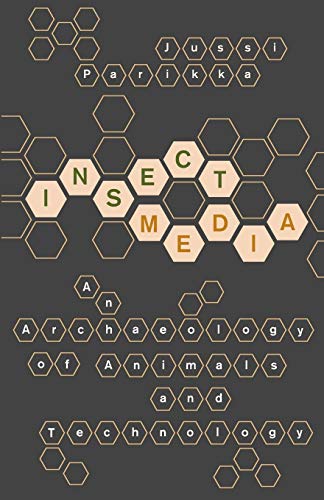 Uncovering the insect logic that informs contemporary media technologies and the network society.

Insect Media: An Archaeology of Animals and Technology by Jussi Parikka

Since the early nineteenth century, when entomologists first popularized the unique biological and behavioral characteristics of insects, technological innovators and theorists have proposed insects as templates for a wide range of technologies. In Insect Media, Jussi Parikka analyzes how insect forms of social organization-swarms, hives, webs, and distributed intelligence-have been used to structure modern media technologies and the network society, providing a radical new perspective on the interconnection of biology and technology.
Through close engagement with the pioneering work of insect ethologists, including Jakob von Uexkull and Karl von Frisch, posthumanist philosophers, media theorists, and contemporary filmmakers and artists, Parikka develops an insect theory of media, one that conceptualizes modern media as more than the products of individual human actors, social interests, or technological determinants. They are, rather, profoundly nonhuman phenomena that both draw on and mimic the alien lifeworlds of insects.
Deftly moving from the life sciences to digital technology, from popular culture to avant-garde art and architecture, and from philosophy to cybernetics and game theory, Parikka provides innovative conceptual tools for exploring the phenomena of network society and culture. Challenging anthropocentric approaches to contemporary science and culture, Insect Media reveals the possibilities that insects and other nonhuman animals offer for rethinking media, the conflation of biology and technology, and our understanding of, and interaction with, contemporary digital culture.

With Insect Media Jussi Parikka offers a theory of media that challenges our traditional views of the natural and the artificial. Parikka not only understands insects through the lens of media and mediation, he also unearths an insect logic at the heart of our contemporary fascination with networks, swarming, and intelligent agents. Such a project requires the ability to interweave cultural theory with a deep understanding of the sciences-something for which Parikka is well-suited. Most importantly, Insect Media reminds us of the non-human aspect of media, communication, intelligence. Insect Media is a book that is sure to create a buzz. -Eugene Thacker, author of After Life

Jussi Parikka is reader in media theory and history at Anglia Ruskin University and the director of the Cultures of the Digital Economy (CoDE) research institute. He is the author of Digital Contagions: A Media Archaeology of Computer Viruses.
Contents
Acknowledgments
Introduction: Insects in the Age of Technology
1. Nineteenth-Century Insect Technics: The Uncanny Affects of Insects
2. Genesis of Form: Insect Architecture and Swarms
3. Technics of Nature and Temporality: Von Uexkull's Ethology
4. Metamorphosis, Intensity, and Devouring Space: Elements for an Insect Game Theory
Intermezzo
5. Animal Ensembles, Robotic Affects: Bees, Milieus, and Individuation
6. Biomorphs and Boids: Swarming Algorithms
7. Sexual Selection in the BioDigital: Teknolust and the Weird Life of SRAs
Epilogue: Insect Media as an Art of Transmutation
Notes
Index
NGR9780816667406
9780816667406
0816667403
Insect Media: An Archaeology of Animals and Technology by Jussi Parikka
Jussi Parikka
Posthumanities
New
Paperback
University of Minnesota Press
20101220
320
null null null null null null null null null null
Book picture is for illustrative purposes only, actual binding, cover or edition may vary.
This is a new book - be the first to read this copy. With untouched pages and a perfect binding, your brand new copy is ready to be opened for the first time
Trustpilot