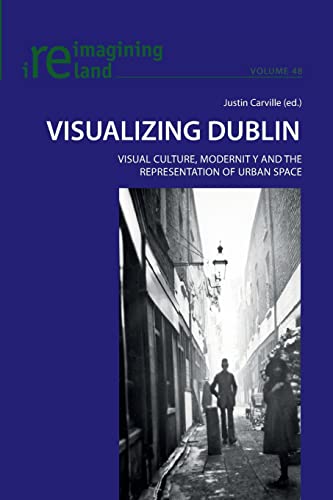 In Stock
$78.99
inc. GST
Drawing together established and emerging scholars from across the arts, humanities and social sciences, this book examines the relationship of Dublin to Ireland's social history through the city's visual culture, including case studies of Dublin's streetscapes, architecture and sculpture, and its depiction in literature, photography and cinema.
Very Good
Only 1 left

Dublin has held an important place throughout Ireland's cultural history. The shifting configurations of the city's streetscapes have been marked by the ideological frameworks of imperialism, its architecture embedded within the cultural politics of the nation, and its monuments and sculptures mobilized to envision the economic ambitions of the state. This book examines the relationship of Dublin to Ireland's social history through the city's visual culture. Through specific case studies of Dublin's streetscapes, architecture and sculpture and its depiction in literature, photography and cinema, the contributors discuss the significance of visual experiences and representations of the city to our understanding of Irish cultural life, both past and present.
Drawing together scholars from across the arts, humanities and social sciences, the collection addresses two emerging themes in Irish studies: the intersection of the city with cultural politics, and the role of the visual in projecting Irish cultural identity. The essays not only ask new questions of existing cultural histories but also identify previously unexplored visual representations of the city. The book's interdisciplinary approach seeks to broaden established understandings of visual culture within Irish studies to incorporate not only visual artefacts, but also textual descriptions and ocular experiences that contribute to how we come to look at, see and experience both Dublin and Ireland.

Justin Carville teaches Historical and Theoretical Studies in Photography and Visual Culture at the Institute of Art, Design and Technology, Dun Laoghaire. His first book, Photography and Ireland, was published in 2011.

GOR010444558
Visualizing Dublin: Visual Culture, Modernity and the Representation of Urban Space by Justin Carville
Justin Carville
Reimagining Ireland
Used - Very Good
Paperback
Peter Lang AG, Internationaler Verlag der Wissenschaften
2013-11-06
316
3034308027
9783034308021
N/A
Book picture is for illustrative purposes only, actual binding, cover or edition may vary.
This is a used book - there is no escaping the fact it has been read by someone else and it will show signs of wear and previous use. Overall we expect it to be in very good condition, but if you are not entirely satisfied please get in touch with us.