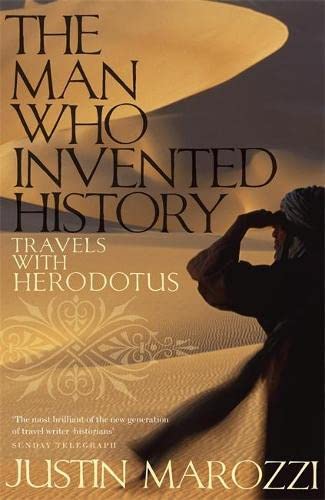 The Man Who Invented History
by Justin Marozzi

A sensational blend of travel and history in the spirit of the man who invented it.

The Man Who Invented History Summary

The Man Who Invented History: Travels with Herodotus by Justin Marozzi

Herodotus is known as the Father of History, but he was much more than that. He was also the world's first travel writer, a pioneering geographer, anthropologist, explorer, moralist, tireless investigative reporter and enlightened multiculturalist before the word existed. He was at once learned professor and tabloid journalist, with an unfailing eye for fabulous material to inform and amuse, to titillate, horrify and entertain.

In his masterpiece the Histories, tall stories of dog-headed men, gold-digging ants and flying snakes jostle for space within a mesmerising narrative of the Persian Wars, from which Greece emerged triumphant in 5 BC to give birth to Western civilisation.

Using the effervescent and profoundly modern Herodotus as his guiding light, Justin Marozzi takes the reader back to his world with eclectic travels to Greece, Turkey, Egypt and war-torn Iraq.

The Man Who Invented History Reviews

The most brilliant of the new generation of travelwriter-historians * Sunday Telegraph *
'Justin Marozzi is that most precious rarity: a serious traveller who is also a real writer, with a wonderful feel for language, a gift for narrative and an enviable sensitivity and lightness of touch. Brave, romantic, erudite and humane, South from Barbary is a genuinely remarkable debut' * William Dalrymple *
'The perfect travel book ...observant, shrewd, patient and exceedingly well attuned ... It is a measure of Marozzi's skill that he handles the big themes of history and the small irritations of third-millennium camel travel with equal charm and felicity' * Financial Times *
'Excellent...a superbly rounded and vivid portrait of one of history's most fascinating personalities' * Andrew Roberts, Evening Standard *
'Captivating, a delightful and fortunate conjunction between the world of [Tamerlane] then and that world transformed today' * Spectator *
'Herodotus may have lived 24 centuries ago but he is our 21st century contemporary and companion - the father not just of history but of comparative ethnography too, not only a brilliant storyteller and indefatigable traveller but also a shrewd and tolerant observer of human fads and foibles on the grandest global scale. Justin Marozzi, himself a veteran traveller and journalist and intrepid crosser of cultural frontiers, does his hero full justice in this scintillating, thought-provoking and entertaining hommage' * Paul Cartledge, Cambridge University *
'A tour de force of travel writing' * John Keay, Literary Review *
'Intellectually stimulating but still able to raise a smile from the reader' * Adventure Travel *
'This is a book of remarkable substance and style, brimming with humanity' * Jeremy Seal, Telegraph *
'A tribute to the man acknowledged as "the father of history", who was also the world's first travel writer, a geographer, anthropologist, explorer and moralist' * Bookseller *
'This is a book of remarkable substance and style, brimming with humanity' * Sunday Telegraph *
'Intellectually stimulating yet still able to riase a smile from the reader' * Adventure Travel *
It's a good excuse to return to his outlandish stories of war and the exotic sexual practices of forgotten cultures * Sunday Times *
'Marozzi sets out faithfully to dog the footsteps of Herodotus, reporting the modern world in its customary warlike state' * The Times *
This is a book of remarkable substance and style, brimming with humanity * Sunday Telegraph *
'Marozzi's energy drives the book forward ... where (he) succeeds above all is in whetting the appetite' * Financial Times *
'The power of the story is the essence of this book and it is to Marozzi's immense credit that his storytelling is almost as good as his mentor's. Together they are marvellous' * Sunday Herald *
'Marozzi himself is an unambiguously Herodotean figure ... The English Patient ... inspired thousands to rush out and buy the Histories. This book deserves to have the same effect' * Anglo Hellenic Review *

Justin Marozzi is a travel writer and historian. A former Financial Times foreign correspondent, he is a Fellow of the Royal Geographical Society and has written widely on the Muslim world, travel and exploration. His previous two books are Barbary and Tamerlane. He is married and lives in Norfolk and London.

GOR001386393
The Man Who Invented History: Travels with Herodotus by Justin Marozzi
Justin Marozzi
Used - Very Good
Hardback
Hodder & Stoughton General Division
2007-01-01
352
0719567114
9780719567117
N/A
Book picture is for illustrative purposes only, actual binding, cover or edition may vary.
This is a used book - there is no escaping the fact it has been read by someone else and it will show signs of wear and previous use. Overall we expect it to be in very good condition, but if you are not entirely satisfied please get in touch with us.