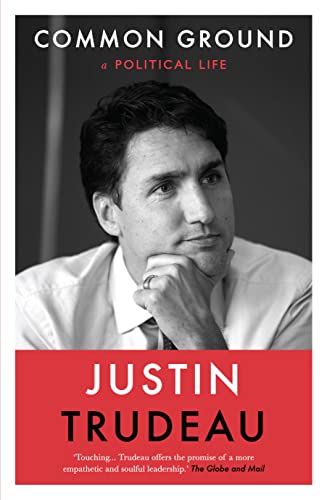 The triumphs and tragedies of Canada's most charismatic politician

Justin Trudeau's candid memoir reveals for the first time the experiences that have shaped him over the course of his life, revealing how his passion for politics took root. From his childhood at the prime ministerial residence of 24 Sussex to his leadership of the Liberal party, Trudeau captures the formative moments of his upbringing, including the influence of his father, Pierre, who was prime minister before him, and the tragic death of his brother, Michel.

Filled with anecdotes, personal reflections, and never-before-seen photographs from his own collection, Common Ground is an intimate portrait of the man who has thrust Canada back onto the world stage. Not only this, but it also presents a moving case for a better kind of politics at a time when people are more disillusioned with politics than ever before.

`Common Ground, could...not have come at a more relevant time...essential reading.' * Press Association *
'[A] superior example of the genre, both deepening our sense of the politician and also the larger political landscape he inhabits.' * The Globe and Mail *

Justin Trudeau is the prime minister of Canada. Prior to his career in politics, Trudeau was a teacher in British Columbia and an advocate for the environment and for Canada's national youth service programme. He is married to Sophie Gregoire, and they have three children.

GOR009320475
Common Ground: A Political Life by Justin Trudeau
Justin Trudeau
Used - Very Good
Paperback
Oneworld Publications
2017-03-02
368
1786071568
9781786071569
N/A
Book picture is for illustrative purposes only, actual binding, cover or edition may vary.
This is a used book - there is no escaping the fact it has been read by someone else and it will show signs of wear and previous use. Overall we expect it to be in very good condition, but if you are not entirely satisfied please get in touch with us.