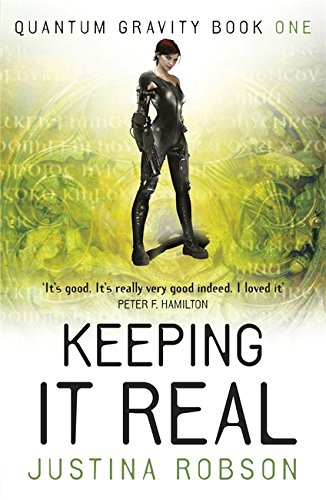 Keeping It Real
by Justina Robson

Used Price
$20.99
inc. GST
Free Shipping in Australia
A heroine who's half robot and all attitude, a world of quantum strangeness; SF that has remembered how to have fun from the UK's most successful female SF writer.
Reviews:
Trustpilot
Very Good

Keeping It Real: Quantum Gravity Book One by Justina Robson

Special agent Lila Black used to be pretty but now she's not so sure.

Her body is now more than half restless carbon and metal alloy machinery. A machine she's barely in control of. It goes into combat mode, enough weapons for a small army springing from within itself, at the merest provocation.

As for her heart . . . well ever since being drawn into a Game by the elven rockstar she's been assigned to protect, she's not even sure she can trust that anymore either.

Justina Robson is an Arthur C. Clarke shortlisted author of nine SF novels, including the highly regarded Quantum Gravity series, and was one of the first writers to win amazon.co.uk's Writer's Bursary. Based in Leeds, she's won multiple international awards and is a sought-after creative writing teacher who has taught at Clarion and the Avon Foundation.

You can learn more at justinarobson.co.uk or by following @JustinaRobson on twitter.

GOR008961277
Keeping It Real: Quantum Gravity Book One by Justina Robson
Justina Robson
Quantum Gravity
Used - Very Good
Paperback
Orion Publishing Co
2017-03-30
288
1473221889
9781473221888
N/A
Book picture is for illustrative purposes only, actual binding, cover or edition may vary.
This is a used book - there is no escaping the fact it has been read by someone else and it will show signs of wear and previous use. Overall we expect it to be in very good condition, but if you are not entirely satisfied please get in touch with us.