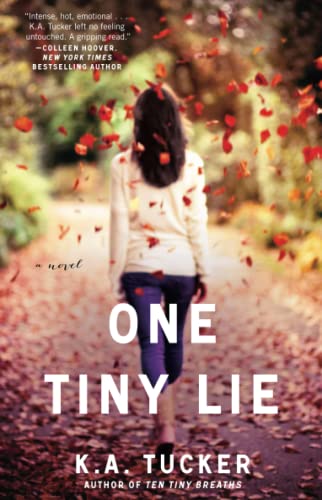 One Tiny Lie
by K.A. Tucker

One Tiny Lie: A Novel by K.A. Tucker

"Make me proud." These were the last words Livie's father ever spoke to her. In the seven years since her parents' tragic death, Livie has done her best to keep this promise through her every choice, word, and action, while looking after her sister with strength and maturity. But with college right around the corner, unexpected challenges will test her resilience-and her heart.

Livie walks into Princeton with a solid plan, and she's dead set on delivering on it: Rock her classes, set herself up for medical school, and meet a good, respectable guy to marry someday. What isn't part of her plan are Jell-O shots; a lovable, party animal roommate she can't say "no" to; and Ashton, the arrogant-and extremely attractive-captain of the men's rowing team who makes Livie's usually non-existent temper flare. Worse, he's best friends and roommates with Connor, who fits Livie's criteria perfectly. So why does she keep thinking about Ashton?

As Livie finds herself facing mediocre grades, career aspirations she no longer thinks she can handle, and feelings for Ashton that she shouldn't have, she's forced to let go of her last promise to her father and, with it, the only identity that she knows.

"There is so much delicious escapism in K.A. Tucker's One Tiny Lie you may well fake a stomach virus so you can hide out to luxuriate in its angst-ridden love fantasy, a kind of Twilight goes to Princeton...this impassioned romp is to be soaked in and savored, sure to keep any woman warm on a cold winter's night." * Shelf Awareness (starred review) *
"Likable characters, steamy liaisons and surprising plot twists add up to a satisfying romance. Readers will be eager for the next installment." * Kirkus *
"Tucker delivers another emotional and unforgettable read. Livie and Ashton's electrically charged connection will have readers frantically turning pages. Add in the witty and sexually suggestive banter and you've got a recipe for one hot and angsty romance. One Tiny Lie tackles heavy topics, but the balance between the romance, coming-of-age storyline and darker issues is extremely well-done. An absolute must read!" * Romantic Times (4.5 out of 5 stars) *
"Intense, hot, emotional...K.A. Tucker left no feeling untouched. A gripping read." -- Colleen Hoover * New York Times bestselling author *
"Fiercely truthful, this book twisted my heart around and handed it to me. This is one you definitely don't want to miss." -- Courtney Cole * New York Times bestselling author *
"Tucker relentlessly ups the erotic ante with every encounter between Kacey and Trent...steamy romance and quirky supporting characters make this an appealing start to the series." * Kirkus *
"K.A. Tucker is a mistress of words, stringing you along with just the right amount of gut-wrenching drama." * Three Chicks and Their Books *

K.A. Tucker writes captivating stories with an edge. She is the bestselling author of the Ten Tiny Breaths and Burying Water series and the novels He Will Be My Ruin, Until It Fades, Keep Her Safe, and The Simple Wild. She currently resides in a quaint town outside Toronto with her husband and two beautiful girls.

GOR006087495
One Tiny Lie: A Novel by K.A. Tucker
K.A. Tucker
The Ten Tiny Breaths Series
Used - Very Good
Paperback
Atria Books
2014-01-14
336
147674047X
9781476740478
N/A
Book picture is for illustrative purposes only, actual binding, cover or edition may vary.
This is a used book - there is no escaping the fact it has been read by someone else and it will show signs of wear and previous use. Overall we expect it to be in very good condition, but if you are not entirely satisfied please get in touch with us.