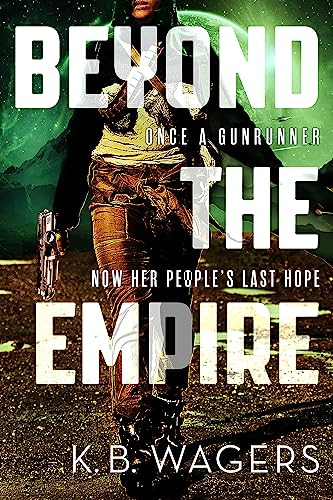 Beyond the Empire
by K. B. Wagers

Beyond the Empire Summary

Beyond the Empire: The Indranan War, Book 3 by K. B. Wagers

The adrenaline-fueled, explosive conclusion to the Indranan War trilogy by K. B. Wagers.
Gunrunner-turned-Empress Hail Bristol was dragged back to her home planet to take her rightful place in the palace. Her sisters and parents have been murdered, and the Indranan Empire is reeling from both treasonous plots and foreign invasion.
Now, on the run from enemies on all fronts, Hail prepares to fight a full-scale war for her throne and her people, even as she struggles with the immense weight of the legacy thrust upon her. With the aid of a motley crew of allies old and new, she must return home to face off with the same powerful enemies who killed her family and aim to destroy everything and everyone she loves. Untangling a legacy of lies and restoring peace to Indrana will require an empress's wrath and a gunrunner's justice.
Beyond the Empire is the adrenalin-fueled conclusion to the Indranan War space adventure trilogy by K. B. Wagers - perfect for fans of Star Wars.

Customer Reviews - Beyond the Empire

Beyond the Empire Reviews

Follows in the tradition of Ann Leckie's Ancillary series to produce a fast-paced story of political intrigue and gender issues held together by a tight plot and a cast of sympathetic characters. Behind the Throne is thought-provoking entertainment and great fun -- GUARDIAN on BEHIND THE THRONE
Taut suspense, strong characterization, and dark, rapid-fire humor are the highlights of this excellent SF adventure debut -- PUBLISHERS WEEKLY on BEHIND THE THRONE
This debut ranks among the best political sf novels in years -- LIBRARY JOURNAL on BEHIND THE THRONE
Reminiscent of Star Wars, author K.B. Wagers has created a futuristic world that mixes classic monarchical structures with fantastical tech in a most natural way -- RT BOOK REVIEWS on BEHIND THE THRONE
Behind The Throne is a politically charged and action-packed story, with a commanding woman at it's centre. It's a wonderful start to a promising new sci-fi series -- SCIFI NOW on BEHIND THE THRONE
This is the kind of book which promises non-stop action and delivers wholeheartedly, with the prose structured to fit a fast-flowing plot -- STARBURST on AFTER THE CROWN
Wagers's exciting second Indranan War space epic keeps roaring, with plenty of action, tension, and constant interplay among the characters -- PUBLISHERS WEEKLY on AFTER THE CROWN
After the Crown continues the saga of a heroine who's the Princess Leia/Han Solo mashup of your dreams -- B&N on AFTER THE CROWN

About K. B. Wagers

K.B. Wagers is the author of the Indranan War trilogy and the forthcoming Farian War trilogy, about the gunrunner empress Hail Bristol. They live in the shadow of Colorado's Pikes Peak with their partner and a crew of poorly behaved cats. They're especially proud of their second-degree black belt in Shaolin Kung Fu and their three Tough Mudder completions. There's never really a moment when they're not writing, but they do enjoy fountain pens and good whiskey.

GOR008955785
Beyond the Empire: The Indranan War, Book 3 by K. B. Wagers
K. B. Wagers
The Indranan War
Used - Very Good
Paperback
Little, Brown Book Group
2017-11-14
416
0356508048
9780356508047
N/A
Book picture is for illustrative purposes only, actual binding, cover or edition may vary.
This is a used book - there is no escaping the fact it has been read by someone else and it will show signs of wear and previous use. Overall we expect it to be in very good condition, but if you are not entirely satisfied please get in touch with us.