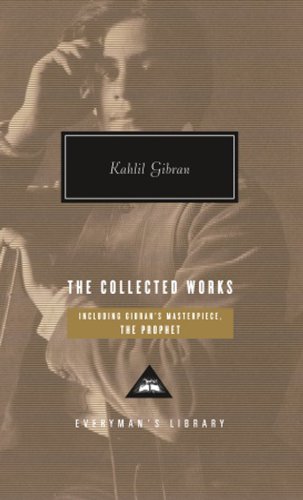 Includes "The Madman", "The Forerunner", "The Prophet", "Sand and Foam", "Jesus the Son of Man", "Earth Gods", "The Wanderer", "The Garden of the Prophet", "Prose Poems", "Spirits Rebellious", "Nymphs of the Valley" and "A Tear and a Smile".

Poet, artist and mystic Kahlil Gibran was born in 1883 to a poor Christian family in Lebanon and emigrated to the United States as an adolescent. His masterpiece, The Prophet, a book of poetic essays written in his youth, has sold over eight million copies in more than twenty languages since its first publication in 1923. But all Gibran's works - essays, stories, parables, prose poems - are imbued with equally powerful simplicity and wisdom, whether meditating upon love, marriage, friendship, work, pleasure, time or grief. Perhaps no other twentieth-century writer has touched the hearts and minds of so remarkably varied and widespread a readership.Included in this volume are The Madman, The Forerunner, The Prophet, Sand and Foam, Jesus the Son of Man, Earth Gods, The Wanderer, The Garden of the Prophet, Prose Poems, Spirits Rebellious, Nymphs of the Valley and A Tear and a Smile.

Khalil Gibran (also known as Kahlil Gibran; born Gibran Khalil Gibran) was born January 6, 1883 and died April 10, 1931. And was an artist, poet and writer. He was born in Lebanon and spent much of his productive life in the United States.

To many he is a genius whose philosophical and prophetic style convey important messages about life and humanity in a simple, yet beautifully eloquent manner, that are as fresh and meaningful in today's world as when they were first written.

GOR002021581
9781841593104
1841593109
The Collected Works of Kahlil Gibran by Kahlil Gibran
Kahlil Gibran
Used - Very Good
Hardback
Everyman
2007-10-26
888
N/A
Book picture is for illustrative purposes only, actual binding, cover or edition may vary.
This is a used book - there is no escaping the fact it has been read by someone else and it will show signs of wear and previous use. Overall we expect it to be in very good condition, but if you are not entirely satisfied please get in touch with us
Trustpilot