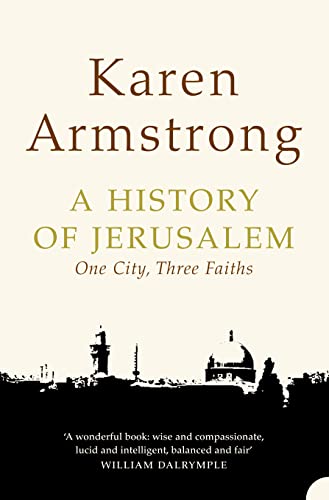 A History of Jerusalem
by Karen Armstrong

`A History of Jerusalem should be read, not only by travellers and potential travellers in Jerusalem, but by all of us.' Stephen Tummin, Daily Telegraph

A History of Jerusalem Summary

A History of Jerusalem: One City, Three Faiths by Karen Armstrong

`A History of Jerusalem should be read, not only by travellers and potential travellers in Jerusalem, but by all of us.' Stephen Tummin, Daily Telegraph

Jerusalem has probably cast more of a spell over the human imagination than any other city in the world.

Held by believers to contain the site where Abraham offered up Isaac, the place of the crucifixion of Christ and the rock from which the prophet Muhammed ascended to heaven, Jerusalem has been celebrated and revered for centuries by Jews, Christians and Muslims. Such is the symbolic power of this ancient city that its future status poses a major obstacle to a comprehensive regional peace in the Middle East.

In this comprehensive and elegantly written work, Karen Armstrong traces the turbulent history of the city from the prehistoric era to the present day.

A History of Jerusalem Reviews

`Deftly told ... Armstrong is a knowledgable guide, and this is a sober and articulate tour of a complex subject and a city where, as she puts it, history is a dimension of the present.' James Owen, Literary Review

Karen Armstrong spent seven years as a Roman Catholic nun and now teaches at the Leo Baeck College for the Study of Judaism and the Training of Rabbis and Teachers. A regular reviewer for the Sunday Times, her books include `A History of God', `Holy War', `The Gospel According to Women', `The Battle for God, Islam: A Short History' and `Through the Narrow Gate'. Her work has been translated into forty languages. She is the author of three television documentaries. In 1999 she was awarded the Muslim Public Affairs Council Media Award. Since September 11, 2001 she has been a frequent contributor to conferences, panels, newspapers and periodicals on both sides of the Atlantic on the subject of Islam and fundamentalism. She lives in London.

GOR002000514
A History of Jerusalem: One City, Three Faiths by Karen Armstrong
Karen Armstrong
Used - Very Good
Paperback
HarperCollins Publishers
2005-01-03
496
0006383475
9780006383475
N/A
Book picture is for illustrative purposes only, actual binding, cover or edition may vary.
This is a used book - there is no escaping the fact it has been read by someone else and it will show signs of wear and previous use. Overall we expect it to be in very good condition, but if you are not entirely satisfied please get in touch with us.