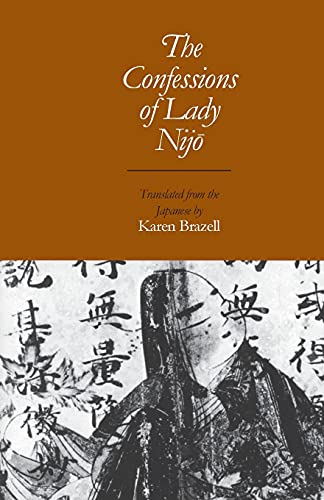 The Confessions of Lady Nijo
by Karen Brazell

The Confessions of Lady Nijo Summary

The Confessions of Lady Nijo by Karen Brazell

In about 1307 a remarkable woman in Japan sat down to complete the story of her life. The result was an autobiographical narrative, a tale of thirty-six years (1271-1306) in the life of Lady Nijo, starting when she became the concubine of a retired emperor in Kyoto at the age of fourteen and ending, several love affairs later, with an account of her new life as a wandering Buddhist nun.

Through the vagaries of history, however, the glory of Lady Nijo's story has taken six and half centuries to arrive. The Confessions of Lady Nijo or Towazugatari in Japanese, was not widely circulated after it was written, perhaps because of the dynastic quarrel that soon split the imperial family, or perhaps because of Lady Nijo's intimate portrait of a very human emperor. Whatever the cause, the book was neglected, then forgotten completely, and only a single manuscript survived. This was finally discovered in 1940, but would not be published until after World War II in 1950. This translation and its annotations draw on multiple Japanese editions, but borrow most heavily from the interpretations offered by Tsugita Kasumi.

The Confessions of Lady Nijo Reviews

"The recent discovery of the only surviving manuscript of The Confessions of Lady Nijo created a sensation in the world of Japanese literature, not only because this journal of a court lady was previously unknown, but because it is a literary masterpiece. It describes with extraordinary honesty and beauty the life of a woman whose lovers included emperors, statesmen, and priests. Surely there can be few comparable books in the world, and Karen Brazell's fine translation makes it a joy to read." -Donald Keene, "Karen Brazell's translation ... is given in unaffected contemporary idiom and assisted by introduction and notes of just the right scope. This is the kind of work to revive that much deprived person, the general reading... We owe thanks to Lady Nijo and to Karen Brazell for making available to us a fine story and fresh understanding of human life. In this translation it seems much more human that strange ever after these seven centuries and in a different cultural setting." -Earl Miner,Journal of the Association of Teachers of Japanese "A fascinating work for several reasons, among them its precise documentation of ways of life and feeling that are wholly dissimilar to the West's." The New Yorker

GOR003148996
The Confessions of Lady Nijo by Karen Brazell
Karen Brazell
Used - Very Good
Paperback
Stanford University Press
1973-06-01
288
0804709300
9780804709309
N/A
Book picture is for illustrative purposes only, actual binding, cover or edition may vary.
This is a used book - there is no escaping the fact it has been read by someone else and it will show signs of wear and previous use. Overall we expect it to be in very good condition, but if you are not entirely satisfied please get in touch with us.