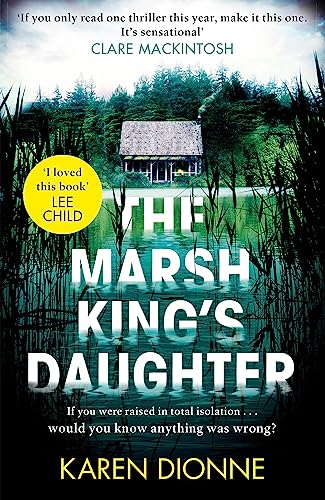 In Stock
$11.99
+10% GST
The suspense thriller of the year - The Marsh King's Daughter will captivate you from the start and chill you to the bone.
Very Good Good Well Read
5 in stock

The Marsh King's Daughter: A one-more-page, read-in-one-sitting thriller that you'll remember for ever by Karen Dionne

'I was born two years into my mother's captivity. She was three weeks shy of seventeen. If I had known then what I do now, things would have been a lot different. I wouldn't have adored my father.'

When notorious child abductor - known as The Marsh King - escapes from a maximum security prison, Helena immediately suspects that she and her two young daughters are in danger.

No one, not even her husband, knows the truth about Helena's past: they don't know that she was born into captivity, that she had no contact with the outside world before the age of twelve - or that her father raised her to be a killer.

And they don't know that The Marsh King can survive and hunt in the wilderness better than anyone... except, perhaps his own daughter.

Packed with gripping suspense and powerful storytelling, The Marsh King's Daughter is a one-more-page, read-in-one-sitting thriller that you'll remember for ever.

A constantly surprising novel which never takes the obvious route, it is emotionally and intellectually thrilling as well as tremendously exciting * SUNDAY EXPRESS *
Tension-filled thriller... Disturbing and atmospheric - it gripped me from the first page * WOMAN & HOME *
Although there are shades of Emma Donahue's Room here, Dionne explores more thoroughly the relationship between captor and captive, the heavy anchoring of a familial bond and the exploitation of childhood innocence... Riveting * EVENING STANDARD *
My God - what a writer, what a book. Kept me gripped * MARK HILL *
Utterly amazing... I loved it * JENNY ASHCROFT *
The prose is sinuous and lush; the storytelling is relentless... Home is set to make the season's other thrillers look undernourished. * IRISH TIMES *

Karen Dionne drew heavily on her experiences during the 1970s in Michigan's Upper Peninsula to write The Marsh King's Daughter, when she and her husband lived in a tent with their six-week-old daughter while they built a tiny cabin. Karen carried water from a stream, made wild apple jelly over a campfire (and defended it against marauding raccoons), sampled wild foods such as cattail heads and milkweed pods, and washed nappies in a bucket (which Karen says is every bit as nasty as it sounds). She enjoys nature photography and lives with her husband in Detroit's northern suburbs.

GOR008747683
The Marsh King's Daughter: A one-more-page, read-in-one-sitting thriller that you'll remember for ever by Karen Dionne
Karen Dionne
Used - Very Good
Paperback
Little, Brown Book Group
2017-06-13
320
0751567396
9780751567397
N/A
Book picture is for illustrative purposes only, actual binding, cover or edition may vary.
This is a used book - there is no escaping the fact it has been read by someone else and it will show signs of wear and previous use. Overall we expect it to be in very good condition, but if you are not entirely satisfied please get in touch with us.