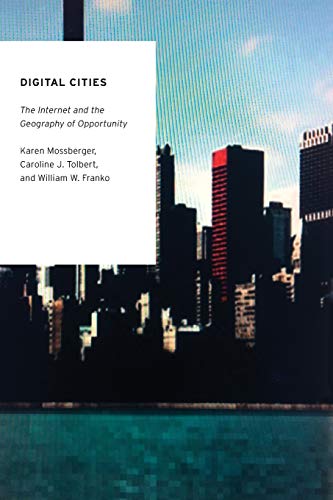 Out of Stock
$54.99
inc. GST
This analysis of how the ability to participate in society online affects political and economic opportunity finds that technology use matters in wages and income and civic participation and voting.
Well Read
Only 0 left

In an age when the United Nations has declared access to the Internet a human right, and universal access to high-speed broadband is a national goal, urban areas have been largely ignored by federal policy. The cost of that neglect may well be the failure to realize the social benefits of broadband and a broadly-connected digital society. Technology offers unparalleled advantages for innovation in urban areas - in the economy, health care, education, energy, transportation, government services, civic engagement, and more. With their density and networks of activity, cities hold the most potential for reaping the benefits of technology. But there are surprisingly substantial disparities in broadband adoption across cities. More puzzlingly, rather than promoting innovation or addressing the high cost of broadband access, the US has mostly funded expensive rural infrastructure in sparsely-populated areas. Digital Cities tells the story of information technology use and inequality in American metropolitan areas and discusses directions for change. The authors argue that mobile-only Internet, the form used by many minorities and urban poor, is a second-class form of access, as they offer evidence that users with such limited access have dramatically lower levels of online activity and skill. Digital citizenship and full participation in economic, social and political life requires home access. Using multilevel statistical models, the authors present new data ranking broadband access and use in the nation's 50 largest cities and metropolitan areas, showing considerable variation across places. Unique, neighborhood data from Chicago examines the impact of poverty and segregation on access in a large and diverse city, and it parallels analysis of national patterns in urban, suburban and rural areas. Digital Cities demonstrate the significance of place for shaping our digital future and the need for policies that recognize the critical role of cities in addressing both social inequality and opportunity.

Digital Cities forcefully and persuasively demonstrates how place matters for understanding and addressing the challenges of innovation and inequality. The authors impressively marshal extensive new data and careful analyses to illuminate significant research perspectives and to open crucial policy questions. * William Barnes, National League of Cities *
The authors of Digital Cities argue, convincingly, that current policy shortchanges American cities and thereby innumerable Americans regarding the potential economic and social benefits of digital technologies. Through detailed analyses and interpretation of a wealth of data, Digital Cities offers important fresh insight about who is being left behind, why this matters, and what can be done to rectify the situation. * Eszter Hargittai, Associate Professor of Communication Studies, Northwestern University *
Digital Cities is an indispensable guide to what we know about broadband adoption patterns and how they matter to the economic and social development of communities. It is a 'must read' for state, local, and national policymakers. * John B. Horrigan, Vice President, The Joint Center for Political and Economic Studies *