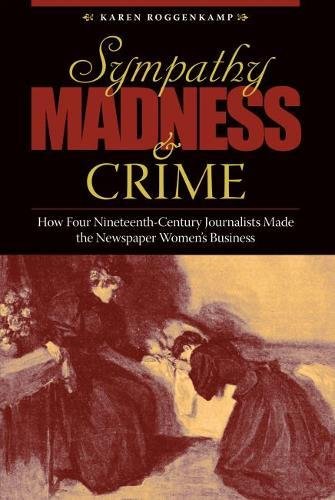 In Stock
$68.99
inc. GST
Explores how, in writing about insane asylums, the mentally ill, prisons, and criminals, women journalists in the late nineteeenth century deployed a gendered sympathetic language to excavate a professional space within a male-dominated workplace. These pioneering women exemplified how narrative sympathy opened female space within the "hard news" city room of America's largest newspapers.
Very Good
Only 1 left

Sympathy, Madness, and Crime: How Four Nineteenth-Century Journalists Made the Newspaper Women's Business by Karen Roggenkamp

In one of her escapades as a reporter for Joseph Pulitzer's New York World, the renowned Nellie Bly feigned insanity in 1889 and slipped, undercover, behind the grim walls of Blackwell's Island mental asylum. She emerged ten days later with a vivid tale about life in a madhouse. Her asylum articles merged sympathy and sensationalism, highlighting a developing professional identity-that of the American newspaperwoman.

The Blackwell's Island story is just one example of how newspaperwomen used sympathetic rhetoric to depict madness and crime while striving to establish their credentials as professional writers. Working against critics who would deny them access to the newsroom, Margaret Fuller, Fanny Fern, Nellie Bly, and Elizabeth Jordan subverted the charge that women were not emotionally equipped to work for mass-market newspapers. They transformed their supposed liabilities into professional assets, and Sympathy, Madness, and Crime explores how, in writing about insane asylums, the mentally ill, prisons, and criminals, each deployed a highly gendered sympathetic language to excavate a professional space within a male-dominated workplace.

Karen Roggenkamp is a professor of English at Texas A&M University-Commerce, USA. Author of Narrating the News: New Journalism and Literary Genre in Late Nineteenth-Century American Newspapers and Fiction (The Kent State University Press, 2005), Roggenkamp's research interests center around periodical culture, the interplay between literature and journalism, and the history of children's literature. She has served as coeditor of American Periodicals, the scholarly journal of the Research Society for American Periodicals.

GOR010333853
Sympathy, Madness, and Crime: How Four Nineteenth-Century Journalists Made the Newspaper Women's Business by Karen Roggenkamp
Karen Roggenkamp
Used - Very Good
Hardback
Kent State University Press
2016-10-30
192
1606352873
9781606352878
N/A
Book picture is for illustrative purposes only, actual binding, cover or edition may vary.
This is a used book - there is no escaping the fact it has been read by someone else and it will show signs of wear and previous use. Overall we expect it to be in very good condition, but if you are not entirely satisfied please get in touch with us.