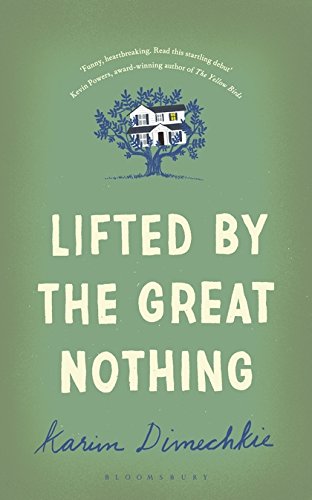 Lifted by the Great Nothing
by Karim Dimechkie

Lifted by the Great Nothing Summary

Lifted by the Great Nothing by Karim Dimechkie

Max doesn't remember his mother, who was murdered by burglars before they emigrated from Beirut to New Jersey. He lives with his father, Rasheed, who is enamored of his concept of American culture - baseball and barbeques - and tries to shed his Lebanese heritage completely. "When we are in America," Reed (for he goes by Reed in America, not Rasheed) tells Max, "we are Americans." Rasheed has a singular purpose in life: to provide Max with a joyful childhood. He showers his son with gifts out of a belief that he deserves all and is capable of anything. Max wants nothing more than to convince his father that he is a successful single parent. The only thing that can disrupt their peaceful universe is the truth - which it does, with force. When Max turns seventeen, he learns from Rasheed's ex-girlfriend that his father has been lying to him. Max's understanding of the world is so rocked that he is subsequently launched on an uncertain mission to Beirut and then Paris. Lifted by the Great Nothing is a startlingly graceful, and often hilarious, coming-of-age story about the lengths we go to preserve the untruths we live by. With its poignant relationships, unsettling misadventures, and surprising love stories, it is a touching and devastating portrait of a young man coming to terms with his country's - and his own - violent past.

Lifted by the Great Nothing Reviews

As welcoming, warm and funny as anything I've read this year ... Dimechkie's depiction of the lonely sadness of losing a once bolt-locked bond with a child is entirely convincing; the harrowing minutiae of offspring betrayal is keenly felt ... A collection of poignant, framed little scenes that burn in the memory way beyond the closing of the book * Big Issue *
The characters immediately drew me in to this funny, heartbreaking novel - they are brilliantly alive. Karim Dimechkie is one of the most psychologically attuned, wise and evocative young novelists I've read. Read this startling debut. * Kevin Powers, Guardian First Book Award-winning author of The Yellow Birds *
Karim Dimechkie is a promising young writer with a fresh, subversive take on the exile and immigrant experience and the stains it leaves on those who survive it or inherit it. Here's a talent to watch and follow. * Jim Crace *
A hugely original, big hearted and staggering debut. Karim Dimechkie's talent leaps off of every page. I know his book will stay with me a very long time. * Philipp Meyer, Pulitzer Prize-nominated author of The Son *

Karim Dimechkie was a Michener fellow. Before that, he taught English in Paris. This is his first novel. He lives in New York City.

GOR006929138
Lifted by the Great Nothing by Karim Dimechkie
Karim Dimechkie
Used - Very Good
Hardback
Bloomsbury Publishing PLC
2015-08-27
304
1408862018
9781408862018
N/A
Book picture is for illustrative purposes only, actual binding, cover or edition may vary.
This is a used book - there is no escaping the fact it has been read by someone else and it will show signs of wear and previous use. Overall we expect it to be in very good condition, but if you are not entirely satisfied please get in touch with us.