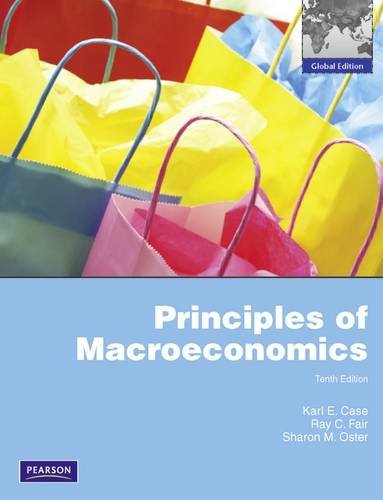 For the one semester Principles of Macroeconomics course.

This title is a Pearson Global Edition. The Editorial team at Pearson has worked closely with educators around the world to include content which is especially relevant to students outside the United States.

Reviewers tell us that Case/Fair is one of the all-time bestselling POE texts because they trust it to be clear, thorough, and complete.

Karl E. Case is Professor of Economics Emeritus at Wellesley College where he has taught for 34

years and served several tours of duty as Department Chair. He is a Senior Fellow at the Joint

prices.He serves as a member of the Index Advisory Committee of Standard and Poor's, and along

with Ray Fair he serves on the Academic Advisory Board of the Federal Reserve Bank of Boston.

Before coming to Wellesley, he served as Head Tutor in Economics (director of undergraduate

studies) at Harvard, where he won the Allyn Young Teaching Prize.He was Associate Editor of

of the AEA's Committee on Economic Education.

duty in the Army, and received his Ph.D. in Economics from Harvard University in 1976.

Professor Case's research has been in the areas of real estate, housing, and public finance. He

is author or coauthor of five books, including Principles of Economics, Economics and Tax Policy,

and Property Taxation: The Need for Reform, and he has published numerous articles in professional

For the last 25 years, his research has focused on real estate markets and prices.He has authored

numerous professional articles, many of which attempt to isolate the causes and consequences of

boom and bust cycles and their relationship to regional and national economic performance.

Ray C. Fair is Professor of Economics at Yale University. He is a member of the Cowles

Foundation at Yale and a Fellow of the Econometric Society. He received a B.A. in Economics

Professor Fair's research has primarily been in the areas of macroeconomics and econometrics,

with particular emphasis on macroeconometric model building.He also has done work in the areas

of finance, voting behavior, and aging in sports. His publications include Specification, Estimation,

Professor Fair has taught introductory and intermediate macroeconomics at Yale. He has

Professor Fair's U.S. and multicountry models are available for use on the Internet free of

charge. The address is http://fairmodel.econ.yale.edu.Many teachers have found that having students

work with the U.S. model on the Internet is a useful complement to an introductory

Sharon M. Oster is the Dean of the Yale School of Management, where she is also the Frederic

Wolfe Professor of Economics and Management. Professor Oster joined Case and Fair as a coauthor

in the ninth edition of this book. Professor Oster has a B.A. in Economics from Hofstra

University and a Ph.D. in Economics from Harvard University.

Professor Oster's research is in the area of industrial organization. She has worked on problems of

diffusion of innovation in a number of different industries, on the effect of regulations on business,

and on competitive strategy. She has published a number of articles in these areas and is the author of

several books, including Modern Competitive Analysis and The Strategic Management of Nonprofits.

Prior to joining the School of Management at Yale, Professor Oster taught for a number of

years in Yale's Department of Economics. In the department, Professor Oster taught introductory

organization. Since 1982, Professor Oster has taught primarily in the Management School,

and has served on the boards of several publicly traded companies and nonprofit organizations.

PART I Introduction to Economics

1 The Scope and Method of Economics

2 The Economic Problem: Scarcity and Choice

10 The Money Supply and the Federal Reserve System

12 Aggregate Demand in the Goods and Money Markets

14 The Labor Market In the Macroeconomy

16 Household and Firm Behavior in the Macroeconomy: A Further Look

20 Open-Economy Macroeconomics: The Balance of Payments and Exchange Rates

GOR007083311
Principles of Macroeconomics: Global Edition by Karl E. Case
Karl E. Case
Used - Very Good
Paperback
Pearson Education Limited
2011-03-07
480
0273754823
9780273754824
N/A
Book picture is for illustrative purposes only, actual binding, cover or edition may vary.
This is a used book - there is no escaping the fact it has been read by someone else and it will show signs of wear and previous use. Overall we expect it to be in very good condition, but if you are not entirely satisfied please get in touch with us.