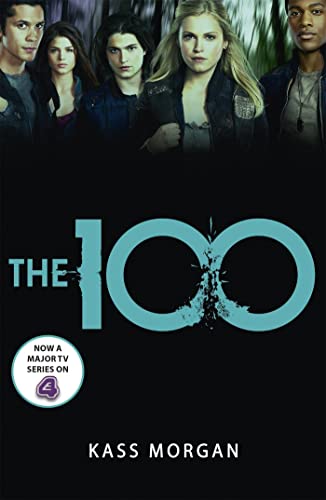 No one has set foot on Earth in centuries - until now.

Ever since a devastating nuclear war, humanity has lived on spaceships far above Earth's radioactive surface. Now, one hundred juvenile delinquents - considered expendable by society - are being sent on a dangerous mission: to re-colonize the planet. It could be their second chance at life...or it could be a suicide mission.

CLARKE was arrested for treason, though she's haunted by the memory of what she really did. WELLS, the chancellor's son, came to Earth for the girl he loves - but will she ever forgive him Reckless BELLAMY fought his way onto the transport pod to protect his sister, the other half of the only siblings in the universe. And GLASS managed to escape back onto the ship, only to find that life there is just as dangerous as she feared it would be on Earth.

Confronted with a savage land and haunted by secrets from their pasts, the hundred must fight to survive. They were never meant to be heroes, but they may be mankind's last hope.

... the writing is fast-paced and engaging. The back-stories that are gradually revealed for each of the characters are interesting, and provide intriguing hints at the tensions and problems that exist in the spaceships. From the strictly monitored one-child policy, to a democracy that is crumbling from within, and a distinct class system that is surely just a spark away from causing the entire colony to explode into conflict, there are multiple fascinating issues that appear to have arisen in this post-apocalyptic society. * thebookbag.co.uk *
Fantastic teen romance... packed with powerful and empowered characters. * Starburst Magazine *
The 100 is set to be the next big thing in the world of YA books and TV - I was thrilled to receive one of 100 proofs of the first book in the series to review. Before the paperback has even had its UK publication, a TV series is being developed by the people behind The Vampire Diaries and Gossip Girl, so I was keen to see what all the buzz was about... I found The 100 a rapid and enjoyable read - as a new entry into the Young Adult dystopia genre, this is an adventurous page-turner with plenty of action and even some romance... I very much enjoyed the descriptive elements of the setting too; the linked spaceships with their different classes of occupants were very well realised, and the sections set on Earth are extremely atmospheric, as the young people experience planet life for the first time. I found myself really gripped, racing through the action to see what would happen next. Morgan's style is dramatic, open, fast and accessible, and will certainly appeal to teenage readers of science fiction, and older ones too. * Adventures with Words *
I enjoyed every minute of it, and I cannot wait to see how they adapt it for the screen. I loved the world Morgan created, and the pacing was spot on... Despite this book not even being released yet, I find myself craving more of this story already... I highly, highly recommend you pre-order your copy of this novel today, and get it read before the TV show starts. I genuinely can't wait. * Somewhere Between the Pages *
Fans of The Hunger Games will love this book set in a post-nuclear-war world. * Sun *
An ingenious double-twist on the jeopardy-driven 'lifeboat' scenario * Evening Standard *

Kass Morgan received a BA from Brown and a Masters degree from Oxford. She currently works as an editor in New York and lives in Brooklyn.

GOR007861149
The 100: Book One by Kass Morgan
Kass Morgan
The 100
Used - Like New
Paperback
Hodder & Stoughton General Division
2013-08-29
336
1444766880
9781444766882
N/A
Book picture is for illustrative purposes only, actual binding, cover or edition may vary.
The book has been read, but looks new. The book cover has no visible wear, and the dust jacket is included if applicable. No missing or damaged pages, no tears, possible very minimal creasing, no underlining or highlighting of text, and no writing in the margins.