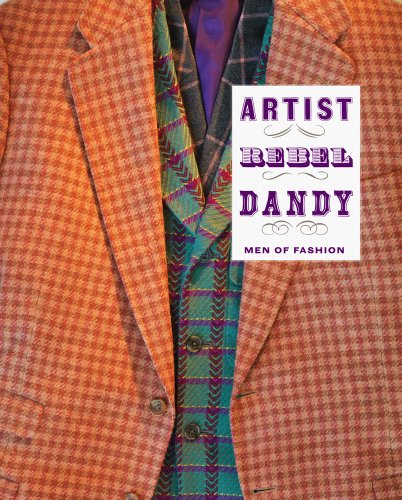 A wide-ranging exploration of the dandy and men's fashion over the past two centuries, from Beau Brummell to hip-hop

A wide-ranging exploration of the dandy and men's fashion over the past two centuries, from Beau Brummell to hip-hop

Artist/Rebel/Dandy celebrates the pleasures of the sharp-dressed man, from the discreet sophistication of the consummately elegant George Bryan "Beau" Brummell in the early 19th century to the diverse, highly personal flair of the tastemakers who color the landscape of menswear today. Since the word "dandy" came into vogue in London in 1813, it has at times been used to describe someone superficial, flamboyant, and self-indulgent. Instead, the dandy is here shown to employ profound thought and imagination in his self-presentation, fashioning an image that often challenges the status quo and transcends the ordinary.

A series of fascinating essays traces the often contradictory definitions and images of the dandy, the history of young men and their clothes in the long 19th century, the exquisite fabrics and tailoring that play an important role in dandy style, and the relationship of black dandyism and hip-hop. In addition, this book features fifteen musings on notable dandies written by individuals who share a kinship with their subject, including Patti Smith considering Charles Baudelaire; a reflection on Oscar Wilde by his grandson, Merlin Holland; Daniela Morera, formerly part of Andy Warhol's Factory crowd, reminiscing about the artist's image; and writer Philip Hoare describing the "thrift-shop dandyism" of director John Waters.

"A visual and cultural history that deftly juxtaposes beautifully reproduced illustrations and photographs of individuals, clothing, and textiles with engaging text, the book will appeal to fashion historians and aspiring dandies."-Publishers Weekly * Publishers Weekly *
"Anyone curious about men's fashion and its history should read this book, which offers one of the most thorough and whimsical accounts of the evolution of male style."-Ann Binlot, The Manual -- Ann Binlot * The Manuel *
"This exquisite catalogue. . . painstakingly and evocatively explores the ambitions, inventions, and fine details of fabric, texture, and cut of elegant linen shirts, broadcloth and naval jackets, university wardrobes, cotton twill weaves, vintage cycling and Harris tweeds, and morning suits. It works on multiple levels to inspire dandies and dandy admirers alike."-Choice
* Choice *
"A must-have for fashionable gentlemen."-Flavorwire * Flavorwire *

GOR005496130
Artist/Rebel/Dandy: Men of Fashion by Kate Irvin
Kate Irvin
Rhode Island School of Design (Yale)
Used - Very Good
Hardback
Yale University Press
2013-05-03
208
0300190816
9780300190816
N/A
Book picture is for illustrative purposes only, actual binding, cover or edition may vary.
This is a used book - there is no escaping the fact it has been read by someone else and it will show signs of wear and previous use. Overall we expect it to be in very good condition, but if you are not entirely satisfied please get in touch with us
Trustpilot