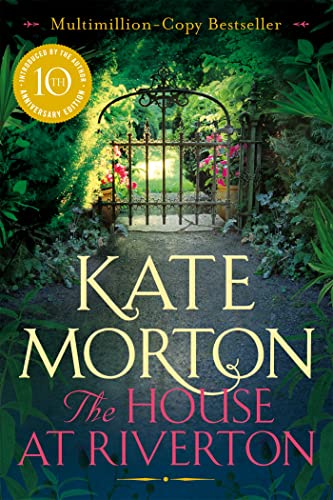 The House at Riverton
by Kate Morton

The House at Riverton Summary

The House at Riverton by Kate Morton

Originally published in 2007, Kate Morton's debut novel, The House at Riverton, became a bestselling sensation and won the Richard and Judy Best Read of the Year. This special tenth anniversary edition of Kate Morton's acclaimed debut features a foreword from the author.

Summer 1924: On the eve of a glittering Society party, by the lake of a grand English country house, a young poet takes his life. The only witnesses, sisters Hannah and Emmeline Hartford, will never speak to each other again.

Winter 1999: Grace Bradley, 98, one-time housemaid of Riverton Manor, is visited by a young director making a film about the poet's suicide. Ghosts awaken and memories, long-consigned to the dark reaches of Grace's mind, begin to sneak back through the cracks. A shocking secret threatens to emerge; something history has forgotten but Grace never could.

Customer Reviews - The House at Riverton

The House at Riverton Reviews

A rollicking good yarn of the sort you might devour in a single weekend * Vogue *
An extraordinary debut . . . Told with a lovely turn of phrase by someone who knows how to eke out tantalising secrets and drama . . . A fascinating time in history, and Morton brings it to life with obvious attention to detail and thorough research * Sunday Telegraph *
An extremely accomplished mystery story . . . haunting and enthralling . . . exquisite not only in the writing but also in the structure * Good Reading *

Kate Morton grew up in the mountains of south-east Queensland and lives now with her husband and young sons in London. She has degrees in dramatic art and English literature, specializing in nineteenth-century tragedy and contemporary gothic novels.

Kate has sold over ten million copies of her novels in thirty-three languages, across thirty-eight countries. The Shifting Fog, published internationally as The House at Riverton, The Forgotten Garden, The Distant Hours and The Secret Keeper have all been number one bestsellers around the world. Each novel won the Australian Book Industry award for General Fiction Book of the Year.

GOR008614735
The House at Riverton by Kate Morton
Kate Morton
Used - Very Good
Paperback
Pan Macmillan
2017-06-15
624
1509841415
9781509841417
Short-listed for National Book Awards Popular Fiction Book of the Year 2008 (UK)
Book picture is for illustrative purposes only, actual binding, cover or edition may vary.
This is a used book - there is no escaping the fact it has been read by someone else and it will show signs of wear and previous use. Overall we expect it to be in very good condition, but if you are not entirely satisfied please get in touch with us.