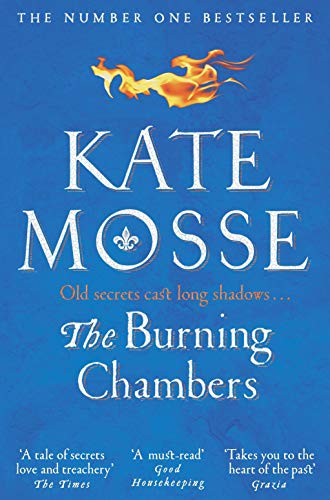 The Burning Chambers
by Kate Mosse

In Stock
$12.99
inc. GST
France 1562: As the Wars of Religion begin to take hold, a courageous Catholic woman and a passionate Huguenot believer find themselves united in a quest to uncover a long-buried secret . . .
Like New Very Good Good
Only 3 left

The Burning Chambers by Kate Mosse

* The Sunday Times Number One Bestseller *

From the multi-million, number one bestselling author of Labyrinth and The Taxidermist's Daughter, comes The Burning Chambers: a gripping story of love and betrayal, mysteries and secrets, conspiracies and divided loyalties, for fans of Ken Follett and Dan Brown.

Carcassonne 1562. Nineteen-year-old Minou Joubert receives an anonymous letter at her father's bookshop. Sealed with a distinctive family crest, it contains just five words:
SHE KNOWS THAT YOU LIVE.

But before Minou can decipher the mysterious message, a chance encounter with a young Huguenot convert, Piet Reydon, changes her destiny forever. For Piet has a dangerous mission of his own, and he will need Minou's help if he is to get out of La Cite alive . . .

A thrilling adventure, and a heart-breaking love story, The Burning Chambers is a historical novel of excitement, conspiracy and danger like no other . . .

Mosse's fans will relish this tale of secrets, love and treachery * The Times *
Another of Mosse's immersive dramas, which takes you to the heart of the past -- Book of the Week * Grazia *
Mosse's narrative lyricism, beautifully drawn female characters and deft journey from the past to the present day are a cut above * Scotland on Sunday *
Rich with historical detail, as you'd expect from Mosse, but it's Minou, the fiery heroine, who makes this a must-read -- Book of the Month * Good Housekeeping *
An irresistible read * Prima *
Impressively bold and ambitious, it features betrayals, broken friendship, family secrets and the horrors of fanaticism. Fans will love it * Daily Mail *
Transporting readers to 16th-century Languedoc where, against a backdrop of simmering sectarian tensions, 19-year-old Minou receives a mysterious message at her father's bookshop. Gripping, complex and intensely atmospheric. * Mail on Sunday *
The Burning Chambers is a tour de force, a compelling adventure that views the past with insight, compassion and humour, and reminds us of the variety of women's voices so often forgotten in the official accounts. * Observer *
Mosse is a master storyteller, balancing thrilling suspense with complex characters and a thoughtful exploration of a fascinating time in history. Her heroine Minou is a pleasure to root for: clever, loving, down-to-earth and courageous! -- Madeline Miller, author of The Song of Achilles and Circe
This is historical fiction to devour. Nobody does it like Kate Mosse -- Anthony Horowitz
First-rate cloak and dagger excitement-who knew the religious wars between Catholics and Huguenots in sixteenth century France could be so riveting to modern audiences? Kate Mosse captures the details of life in the Languedoc region of France, famed for its beauty, but hiding many secrets, in this masterful novel -- Margaret George, New York Times bestselling author of The Confessions of Young Nero
Mosse does what good popular historical novelists do best - make the past enticingly otherworldly, while also claiming it as our own * Independent *
A powerful storyteller with an abundant imagination * Daily Telegraph *
Oh, what a glorious novel. A masterly tour of history; a rapturous romance; and - best of all - a breathless thriller, alive with treachery, with danger, with atmosphere, with beauty. This book will transport you. Kate Mosse is that rarest of writers: a storyteller who breathes fresh life into vanished worlds -- A. J. Finn, author of The Woman in the Window

Kate Mosse is a number one international bestselling novelist, playwright and non-fiction writer. The author of six novels and short story collections - including the multimillion-selling Languedoc Trilogy (Labyrinth, Sepulchre and Citadel) and Gothic fiction The Winter Ghosts and The Taxidermist's Daughter, which she is adapting for the stage - her books have been translated into thirty-seven languages and published in more than forty countries. She is the Founder Director of the Women's Prize for Fiction and a regular interviewer for theatre & fiction events.

Kate divides her time between Chichester in West Sussex and Carcassonne in south-west France. The second novel in The Burning Chambers series, The City of Tears - which is set in Paris, London and Amsterdam - will be published in May 2020.

GOR009774562
The Burning Chambers by Kate Mosse
Kate Mosse
The Burning Chambers
Used - Like New
Paperback
Pan Macmillan
2019-03-07
608
1509806857
9781509806850
N/A
Book picture is for illustrative purposes only, actual binding, cover or edition may vary.
This is a used book - there is no escaping the fact it has been read by someone else and it will show signs of wear and previous use. Overall we expect it to be in very good condition, but if you are not entirely satisfied please get in touch with us.