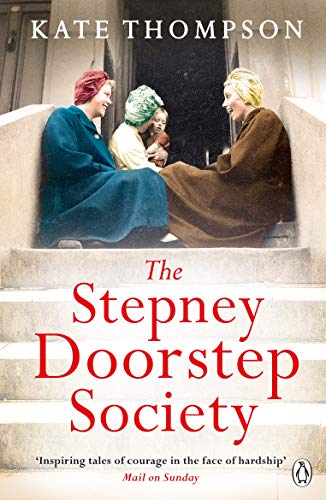 The Stepney Doorstep Society: The remarkable true story of the women who ruled the East End through war and peace by Kate Thompson

The unsung and remarkable stories of the women who held London's East End together during not one, but two world wars.

While the men were at war, these women ruled the streets of the East End. Brought up with firm hand in the steaming slums and teeming tenements, they struggled against poverty to survive, and fought for their community in our country's darkest hours.

But there was also joy to be found. From Stepney to Bethnal Green, Whitechapel to Shoreditch, the streets were alive with peddlers and market stalls hawking their wares, children skipping across dusty hopscotch pitches, the hiss of a gas lamp or the smell of oxtail stew. You need only walk a few steps for a smile from a neighbour or a strong cup of tea.

From taking over the London Underground, standing up to the Kray twins and crawling out of bombsites, The Stepney Doorstep Society tells the vivid and moving stories of the matriarchs who remain the backbone of the East End to this day.
____________

'An importance glimpse into a vanishing world' Sunday Express

The remarkable story of the women who ruled the East End through the Blitz. A lively authentic social history, the book centres around five formidable working-class women . . . a hair-raising, but always warmhearted tale * My Weekly *
Kate Thompson's interviews with east London's wartime matriarchs offer an important glimpse into a vanishing world * Sunday Express *
Kate Thompson writes books that make you laugh and make you cry, sometimes at the same time. You cannot put them down. I advise you to read them all! -- Anita Dobson
Inspiring tales of courage in the face of hardship * Mail on Sunday *
Astonishing * Radio 5 Live *
Crammed full of fascinating stories * BBC 2 Steve Wright *
Untold stories from wartime Blitz * Woman's Weekly *
Britain's forgotten army * Daily Express *
Celebrates the lives of tough wartime matriarchs * ITV News *
Formidable women * Take a Break *

Kate Thompson is an award-winning journalist, ghost-writer and novelist who has published nine fiction and non-fiction titles.

She worked at Pick Me Up magazine for six years and was subsequently named as IPC's 'True Life Writer of the Year' in 2006. Since then, Kate has worked on national newspapers, including the Daily Express and Daily Mail.

Her debut novel, Secrets of the Singer Girls, became a Sunday Times bestseller in 2015.

GOR009694538
The Stepney Doorstep Society: The remarkable true story of the women who ruled the East End through war and peace by Kate Thompson
Kate Thompson
Used - Very Good
Paperback
Penguin Books Ltd
2019-02-07
336
0718189868
9780718189860
N/A
Book picture is for illustrative purposes only, actual binding, cover or edition may vary.
This is a used book - there is no escaping the fact it has been read by someone else and it will show signs of wear and previous use. Overall we expect it to be in very good condition, but if you are not entirely satisfied please get in touch with us.