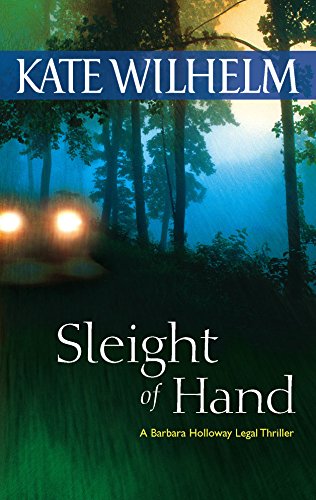 Sleight of Hand
by Kate Wilhelm

Sleight of Hand by Kate Wilhelm

Gregarious Vegas entertainer Wally Lederer has a lucrative
showbiz career, but when a childhood friend accuses him of
stealing a valuable artifact, his checkered past comes back to
haunt him. Wally claims he's turned his life around since
spending time in the slammer for picking pockets, but will the
police believe him? More important, does Barbara believe him
when he pleads his case to her?

Wally swears he's innocent. But when his accuser is found
murdered, Barbara knows Wally is in serious trouble--
the police have named him as their prime suspect.

Barbara begins to dig up the dirt, and before long new evidence
points toward an unlikely killer. Now Barbara must decide if
protecting her client by revealing the truth will destroy another
life she means to save.

GOR010381055
Sleight of Hand by Kate Wilhelm
Kate Wilhelm
Used - Well Read
Paperback
Mira Books
2007-08-01
410
0778324885
9780778324881
N/A
Book picture is for illustrative purposes only, actual binding, cover or edition may vary.
This is a used book. We do our best to provide good quality books for you to read, but there is no escaping the fact that it has been owned and read by someone else previously. Therefore it will show signs of wear and may be an ex library book.