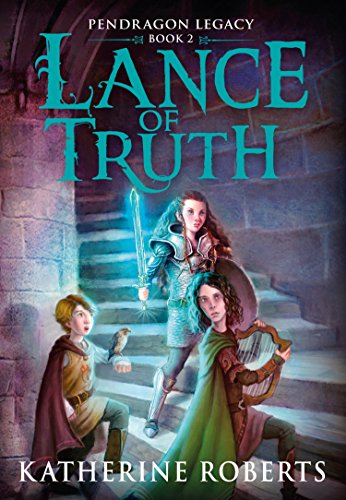 Lance Of Truth
by Katherine Roberts

Lance Of Truth by Katherine Roberts

King Arthur's secret daughter, Rhianna Pendragon, has faced mortal danger, ice-breathing dragons and dark magic to win Excalibur, the Sword of Light. But the sword is just one of four magical Lights that she must find to restore Arthur's soul to his body and bring him back to life. Now Rhianna must head into the wilds of the North, to find the second Light, the Lance of Truth, before her evil cousin Mordred claims it. But Mordred is holding her mother Guinevere captive. Can Rhianna stay true to her quest for the Lights and save the mother she's never known, before Mordred wreaks his terrible revenge? The second book in an epic fantasy series set in the Dark Ages.

It's fantastic, so accessible - I loved it! * The Bookette *
This is a novel about friendship, courage and is perfectly aimed at a 10+ market. * The British Fantasy Society *
"I definitely would recommend it to everyone looking for a gripping read and lots of surprises." * The Guardian *

Katherine Roberts studied Maths at Bath University. She worked with racehorses until finding her muse, a unicorn, in 1984, and writing her first fantasy story. She is now an award-winning author of fantasy stories including THE ENCHORIUM SEQUENCE and THE SEVEN FABULOUS WONDERS. Her first novel SONG QUEST won the Branford Boase award for an outstanding debut novel for children and her books have been published by HarperCollins, Chicken House and Scholastic US. She lives in Devon. Follow Katherine at www.katherineroberts.co.uk or on Twitter: @AuthorKatherine.

GOR005754663
Lance Of Truth by Katherine Roberts
Katherine Roberts
Pendragon Legacy
Used - Very Good
Paperback
Templar Publishing
2013-02-01
464
184877866X
9781848778665
N/A
Book picture is for illustrative purposes only, actual binding, cover or edition may vary.
This is a used book - there is no escaping the fact it has been read by someone else and it will show signs of wear and previous use. Overall we expect it to be in very good condition, but if you are not entirely satisfied please get in touch with us.