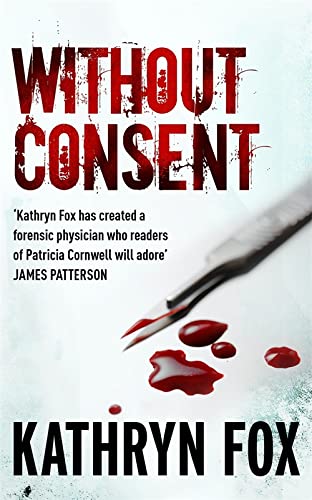 Without Consent
by Kathryn Fox

Dr Anya Crichton, pathologist and forensic physician, is back on another chilling case that will stretch her forensic talents to the limit.

This time, Anya is on the trail of a violent serial rapist. Suspicion immediately falls on the deviant Geoffrey Willard, recently released from prison after serving a full term for the brutal rape and murder of a fourteen year old girl.

As Anya delves deeper into a myriad of forensic evidence, she begins to suspect that Willard is innocent. When two of the victims are later stabbed to death, a blood-smeared shirt holds the key to the truth.

Only the killer knows that Anya has made a mistake. One that could prove fatal...

Kathryn Fox has created a forensic physician who readers of Patricia Cornwell will adore * James Patterson *
Will keep you gripped from start to finish...break-neck plots...fascinating medical and police procedural details . . . What a compelling new talent! * Jeffery Deaver *
Patricia Cornwell's forensic fantasies may have cooled, but Fox's morgue-talk promises to plug the gap with a crime debut that nicely marries the personal life of the sleuth with that of the murder victim * Independent *
MALICIOUS INTENT is the most exciting crime fiction from Australia for a long time... Crichton investigates with enthusiasm mixed with fear. The climax is shocking and chilling. If Fox can do this on her debut novel, the future looks bright * Marcel Berlins, The Times *
Fox is stomach-churningly good * Mail on Sunday *
Meticulously researched and seamlessly plotted, MALICIOUS INTENT marks out Kathryn Fox as a name to watch * Crime Time *

Kathyrn Fox is a general practitioner with a special interest in forensic medicine. She lives in Sydney where she also works as a freelance medical journalist, having written regularly for publications including Australian Doctor, CLEO magazine and the Sun-Herald.

GOR000358600
Without Consent: Anya Crichton 2 by Kathryn Fox
Kathryn Fox
Used - Very Good
Paperback
Hodder & Stoughton General Division
2007-03-22
416
0340895861
9780340895863
N/A
Book picture is for illustrative purposes only, actual binding, cover or edition may vary.
This is a used book - there is no escaping the fact it has been read by someone else and it will show signs of wear and previous use. Overall we expect it to be in very good condition, but if you are not entirely satisfied please get in touch with us.