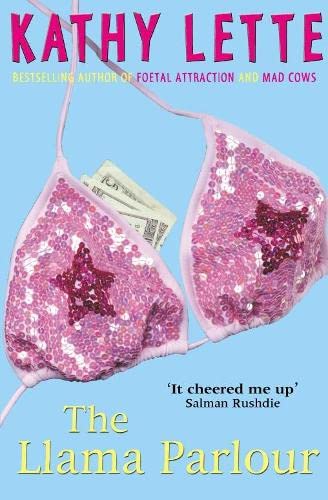 The Llama Parlour
by Kathy Lette

The Llama Parlour by Kathy Lette

Kat's in Hollywood to meet a man who's romantic. You know, the type who talks to you after sex. Nothing special, as long as he has pectorals, a Ph.D., a nice bum, a non-sexist attitude, can cook souffles and wants a loving relationship with bone-marrow melting sex. Now, is that too much to ask of a billionaire? For Kat, love is in the air. Her mate, Tash assures her it's only car exhaust . . .

'Fast, funny and compulsively readable, a love story with the spirit of balsamic vinegar added' MAUREEN FREELY, OPTIONS. 'It cheered me up' SALMAN RUSHDIE

Born and bred in Sylvania Waters, Kathy Lette is regarded as a national treasure in her native Australia. She is the author of Girls Night Out , Llama Parlour, Foetal Attraction, Mad Cows, Altar Ego and Nip an' Tuck. Mad Cows was made into a film, starring Anna Friel, Joanna Lumley and Greg Wise which came out in Autumn 1999.

GOR004095288
The Llama Parlour by Kathy Lette
Kathy Lette
Used - Very Good
Paperback
Pan Macmillan
1993-01-22
256
0330326856
9780330326858
N/A
Book picture is for illustrative purposes only, actual binding, cover or edition may vary.
This is a used book - there is no escaping the fact it has been read by someone else and it will show signs of wear and previous use. Overall we expect it to be in very good condition, but if you are not entirely satisfied please get in touch with us.