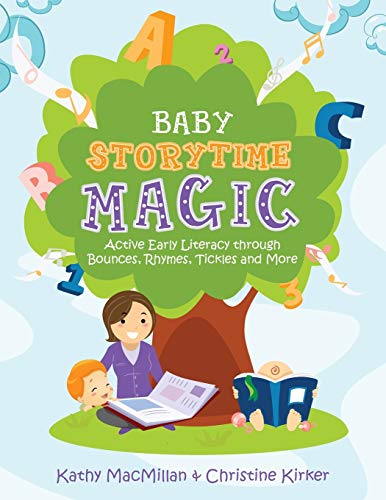 Whether you've been presenting baby story times for fifteen years or fifteen minutes, you probably already know that the first five years of life are key for brain development and early literacy. Many public libraries have instituted baby and toddler programs, but finding exciting materials for baby story time that go beyond nursery rhymes can be a challenge. Baby Storytime Magic is a treasure trove of new and exciting ideas for programs, all of which revolve around themes from a baby's world. Inside this resource you'll findPacked with ready-to-use activities, reducing prep time substantially, this book is a valuable early literacy tool for every children's librarian.
Kathy MacMillan is a freelance writer, American Sign Language interpreter, and storyteller. She is the author of Try Your Hand at This! Easy Ways to Incorporate Sign Language into Your Programs (Scarecrow Press, 2006), A Box Full of Tales (ALA Editions, 2008), and Little Hands and Big Hands: Children and Adults Signing Together (Huron Street Press, 2013), and co-author of Storytime Magic (ALA Editions, 2009), Kindergarten Magic (ALA Editions, 2011), and Multicultural Storytime Magic (ALA Editions, 2012). She was the library/media specialist at the Maryland School for the Deaf from 2001 to 2005 and prior to that was a children's librarian at Carroll County (Maryland) Public Library and Howard County (Maryland) Library, where she developed and presented hundreds of programs for all ages. She holds a Master of Library Science degree from the University of Maryland, College Park, and has been reviewing for School Library Journal since 1999.

Christine Kirker is a library associate with the Carroll County (Maryland) Public Library. Since joining the library staff in 2005, Christine has developed and presented many programs for children of all ages, including monthly preschool science programs. She is the co-author of Storytime Magic (ALA Editions, 2009), Kindergarten Magic (ALA Editions, 2011), and Multicultural Storytime Magic (ALA Editions, 2012). Previously, Christine spent ten years at the University of Maryland, Baltimore County (UMBC) as a research analyst for the Office of Institutional Research. She graduated from UMBC in 1992, USA.
NGR9780838912164
9780838912164
0838912168
Baby Storytime Magic: Active Early Literacy Through Bounces, Rhymes, Tickles and More by Kathy MacMillan
Kathy MacMillan
New
Paperback
American Library Association
2014-05-30
120
N/A
Book picture is for illustrative purposes only, actual binding, cover or edition may vary.
This is a new book - be the first to read this copy. With untouched pages and a perfect binding, your brand new copy is ready to be opened for the first time
Trustpilot