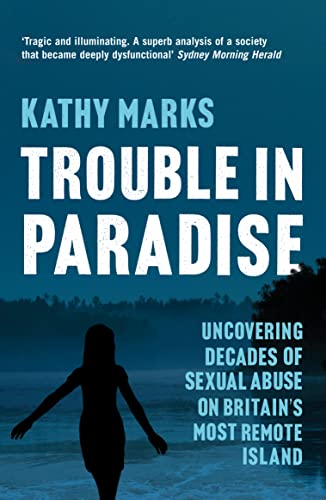 Trouble in Paradise by Kathy Marks

A shocking expose of the terrible secrets at the heart of the Pitcairn Island community - a tale of systematic child abuse and rape which stretches back over 40 years.

Trouble in Paradise: Uncovering the Dark Secrets of Britain's Most Remote Island by Kathy Marks

A shocking expose of the terrible secrets at the heart of the Pitcairn Island community - a tale of systematic child abuse and rape which stretches back over 40 years.

Pitcairn Island - home to the descendants of the mutineers of the Bounty - has long been thought of as a tropical paradise. Wild and remote, it is Britain's most isolated outpost and a fantasy destination for many.

But in 1999, British police, alerted by unsettling reports of a rape, descended on the island. Their investigation developed into a major enquiry which revealed that Pitcairn was the site of widespread and horrific sexual abuse instigated by the island men on girls as young as twelve. Scarcely a man on the island was untainted by the allegations, and almost none of the women had escaped, though most residents feigned ignorance, even when their own daughters were abused. Abusers included the magistrates and police officers as well as brothers and uncles. Few of the victims were able to leave the island; those who did never went back.

Kathy Marks was one of only six journalists permitted to live on the island while she reported on the ensuing trial and witnessed Pitcairn's domestic workings first-hand. In this riveting account she documents a society gone badly astray, leaving lives shattered, codes broken and a paradise truly lost.

Kathy Marks is the Asia Pacific correspondent for the Independent newspaper. Since 1999 she has been based in Sydney, reporting on major stories from the region, including the political situation in East Timor, the 2002 Bali bombing and the Boxing Day tsunami in 2004.

GOR011380041
9780007286140
0007286147
Trouble in Paradise: Uncovering the Dark Secrets of Britain's Most Remote Island by Kathy Marks
Kathy Marks
Used - Like New
Paperback
HarperCollins Publishers
2008-08-04
400
N/A
Book picture is for illustrative purposes only, actual binding, cover or edition may vary.
The book has been read, but looks new. The book cover has no visible wear, and the dust jacket is included if applicable. No missing or damaged pages, no tears, possible very minimal creasing, no underlining or highlighting of text, and no writing in the margins
Trustpilot