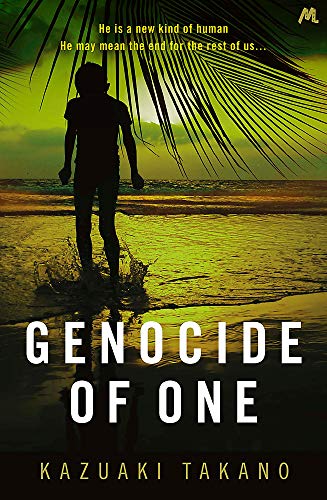 Genocide Of One
by Kazuaki Takano

Used Price
$20.99
inc. GST
Free Shipping in Australia
A bestselling Japanese thriller about a child who may be the future of the human race - or the cause of its extinction.
Very Good Good

Genocide Of One Summary

Genocide Of One by Kazuaki Takano

He is a new kind of human
He may mean the end for the rest of us...

One bright morning in Washington D.C., the US President learns of a terrifying new threat to national security.

Soon afterwards, American mercenary Jonathan Yeager is asked to lead a team into the Congo to eliminate a mysterious enemy - a job which will help him pay for treatment for his dying son.

But when they reach Africa, the threat turns out to be a three-year-old child named Akili: the next step in human evolution. The soldiers are under orders to kill the boy before his full potential can be realised. Yet Akili's advanced knowledge might be the only hope Yeager has to save his son's life...

With time running out to choose a side, Yeager must decide whether to follow his orders or to save a creature who may not be as harmless or innocent as he appears.

Because Akili is already the smartest being on the planet, with the power to either save humanity - or destroy it.

Genocide Of One Reviews

Kazuaki Takano studied Film Studies at Los Angeles City College and has worked for many years as a scriptwriter in Japan. Takano's debut novel, Thirteen Steps, won the 47th Edogawa Rampo Award for best mystery of the year in 2001. EXTINCTION was nominated for the Naoki Prize and won the Yamada Futaro Award, selling 340,000 copies since its publication in April 2011.

GOR006393710
Genocide Of One by Kazuaki Takano
Kazuaki Takano
Used - Very Good
Paperback
Hodder & Stoughton General Division
2014-12-04
512
1444759515
9781444759518
N/A
Book picture is for illustrative purposes only, actual binding, cover or edition may vary.
This is a used book - there is no escaping the fact it has been read by someone else and it will show signs of wear and previous use. Overall we expect it to be in very good condition, but if you are not entirely satisfied please get in touch with us.