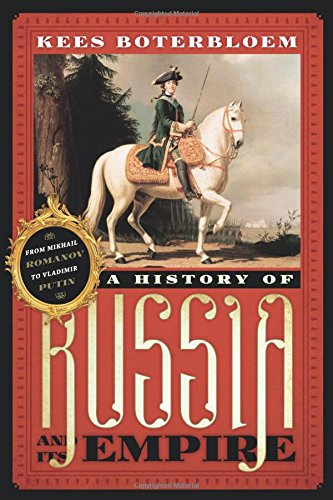 A History of Russia and Its Empire
by Kees Boterbloem

A History of Russia and Its Empire Summary

A History of Russia and Its Empire: From Mikhail Romanov to Vladimir Putin by Kees Boterbloem

This clear and focused text provides an introduction to imperial Russian and Soviet history from the crowning of Mikhail Romanov in 1613 to Vladimir Putin's new term. Through a consistent chronological narrative, Kees Boterbloem considers the political, military, economic, social, religious, and cultural developments and crucial turning points that led Russia from an exotic backwater to superpower stature in the twentieth century. The only text designed and written specifically for a one-semester course on this four-hundred-year period, it will appeal to all readers interested in learning more about the history of the people who have inhabited one-sixth of the earth's landmass for centuries.

A History of Russia and Its Empire Reviews

In a concise and readable account of the past four centuries of 'Russia' (the Russian Empire, the Soviet Union, and today's Russian Federation), Boterbloem skillfully condenses a rich and complex history into a lucid narrative accessible to undergraduate students. Highly recommended. -- Hiroaki Kuromiya, Indiana University Bloomington
Kees Boterbloem has produced a long-needed one-volume text on modern Russian history. He expertly intertwines the different strands of Russian history that show how Russia went from relative obscurity to one of the world's superpowers. This text is clear, concise, and accessible to a broad audience. It is ideal for a one-semester survey of modern Russian history. Highly recommended! -- William Benton Whisenhunt, College of Dupage
Boterbloem provides a succinct introductory survey of Russian history from the foundation of the Romanov Dynasty in 1613 to the beginning of Vladimir Putin's third term as president of the Russian Federation in 2012. The author emphasizes the role of important leaders and the rapid growth of the multiethnic Russian Empire. Boterbloem explores continuity and change from the Russian Empire to the Soviet Union to the Russian Federation, arguing that a general absence of a rule of law or a frequent ignoring of existing laws by leaders and commoners alike was a similar phenomenon in all three states. The work is quite appropriate for undergraduate courses, especially those seeking to cover Russian and Soviet history in one semester. Most useful for students and instructors are a 20-page time line and lists at the end of each chapter of relevant translated primary source readings, secondary scholarly selections, websites, and films. . . . Summing Up: Recommended. General and undergraduate collections. * CHOICE *
This book is a fine introductory survey of Russian history, designed for one-semester university courses. The volume covers all key events in the history of Russia from the seventeenth century to the present day. . . .The book provides a chronology of events, has an index of names and terms, many maps, and unique photographs. All of this m kes it very convenient for student learning. The volume can be interesting for anybody looking for a comprehensive, concise Russian history. * The Russian Review *

Kees Boterbloem is professor of history at the University of South Florida and editor of The Historian.

GOR010426146
A History of Russia and Its Empire: From Mikhail Romanov to Vladimir Putin by Kees Boterbloem
Kees Boterbloem
Used - Like New
Paperback
Rowman & Littlefield
2013-08-28
364
0742568393
9780742568396
N/A
Book picture is for illustrative purposes only, actual binding, cover or edition may vary.
The book has been read, but looks new. The book cover has no visible wear, and the dust jacket is included if applicable. No missing or damaged pages, no tears, possible very minimal creasing, no underlining or highlighting of text, and no writing in the margins.