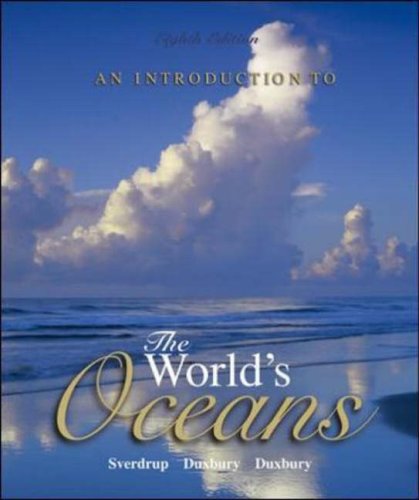 An Introduction to the World's Oceans
by Keith Sverdrup

In Stock
$123.99
inc. GST
Blends information and research with basic principles to form an introduction to the sciences of the oceans. This work examines findings such as analyzing satellite data and large-scale oceanographic programs. It contains examples that illustrate principles of oceanography, and places emphasis on the physical and geological aspects of the oceans.
Good
Only 1 left

An Introduction to the World's Oceans Summary

An Introduction to the World's Oceans by Keith Sverdrup

An Introduction to the World's Oceans, 8/e is an introductory oceanography text intended for students without a background in mathematics, chemistry, physics, geology, or biology. It emphasizes the role of basic scientific principles in helping understand the processes that govern the ocean and the earth.

A major objective of An Introduction to the World's Oceans is to stimulate student interest and curiosity by blending contemporary information and research with basic principles to form an integrated introduction to the sciences of the oceans. To keep the text as current as possible, the authors conduct their own research and examine other findings such as analyzing satellite data and large-scale oceanographic programs. From this vast amount of data, they select interesting, relevant, and understandable examples that illustrate contemporary principles of oceanography.

An Introduction to the World's Oceans places greater emphasis on the physical and geological aspects of the oceans than on the chemical and geochemical properties, because the latter disciplines require more specific background knowledge. An ecological approach helps integrate the biological chapters with other subjects. Students are encouraged to look at oceanography as a cohesive and united discipline rather than a collection of subjects gathered under a marine umbrella. As with all previous editions, the authors continue to make each chapter stand as independently as possible, so that professors can assign chapters in the order that best suits their classrooms.

The History of OceanographyPrologue: The History of Oceanography1 The Water Planet2 Plate Tectonics3 The Sea Floor and Its Sediments4 The Physical Properties of Water5 The Chemistry of Seawater6 The Structure and Motion of the Atmosphere7 Circulation and Ocean Structure8 The Currents9 The Waves10 The Tides11 Coasts, Beaches, and Estuaries12 Environmental Issues and Concerns13 The Living Ocean14 Production and Life15 The Plankton: Drifters of the Open Ocean16 The Nekton: Free Swimmers of the Sea17 The Benthos: Dwellers of the Sea FloorAppendix A: Scientific (or Exponential) NotationAppendix B: SI UnitsAppendix C: Equations and Quantitative RelationshipsGlossary

GOR009917486
An Introduction to the World's Oceans by Keith Sverdrup
Keith Sverdrup
Used - Good
Hardback
McGraw-Hill Education - Europe
2004-01-10
0072945559
9780072945553
N/A
Book picture is for illustrative purposes only, actual binding, cover or edition may vary.
The book has been read but remains in clean condition. All pages are intact and the cover is intact. Some minor wear to the spine.