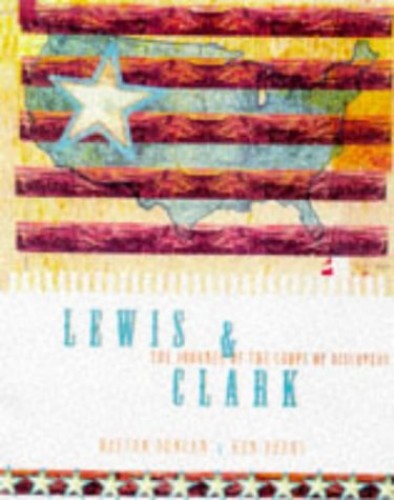 Used Price
$29.99
inc. GST
Free Shipping in Australia
Written by Dayton Duncan, this book is illustrated with the full spectrum of animals, plants, landscapes, people and cultures discovered by Lewis and Clark on their expedition. Using the explorers' journals, Duncan reports on their encounters with Indians, their loneliness, excitement, hunger and much more.
Reviews:
Trustpilot
Very Good

Lewis & Clark: The Corps of Discovery by Ken Burns

On 14 May 1804 Meriwether Lewis and William Clark set out from Cape Dubois near St Louis with nearly four dozen man and headed west on the Missouri River. Sent by their scientist - President Thomas Jefferson, they were embarking on the nation's first exploration into unknown places, the most important expedition in American history. They called themselves the Corps of Discovery, yet they would fail to discover the primary object of their mission - the Northwest passage - a mythical all-river route through the mountains. Instead, their real discovery would be the land itself - and the promises it held. This magnificent book, written by Dayton Duncan - with contributions from Ken Burns, Stephen Ambrose and Erica Funkhouser - is illustrated with the full spectrum of animals, plants , landscapes, people and entire cultures which had never previously been seen by 'civilized' men. It also draws on the journals kept by Lewis and Clark and by others in the Corps: reports of their encounters with indians; loving descriptions of the Western landscape; introductions to two of the most fascinating characters in the party, the Shoshone woman Sacagawea and Clark's slave York; intense accounts of hunger, numbing cold, loneliness, excitement and much more.

Dayton Duncan is the author of five other books, two of which stem from his involvement with Ken Burns on the twelve hour documentary series The West, for which he was co-writer and consulting producer. Currently he is writing and co-producing a television documentary about Lewis and Clark. His first book, Out West, was an account of his own re-enactment of the Corps of Discovery's trek. he has been a reporter, editor, and editorial writer for two New Hampshire newspapers and has worked in politics as chief of staff to New Hampshire Governor Hugh Gallen, as national deputy press secretary for Walter Mondale in the 1984 presidential campaign, and as press secretary for Michael Dukakis in the 1988 campaign. he lives in Walpole, New Hampshire.
Ken burns, founder of Florentine Films, was the director, producer and co-writer of the landmark PBS television series, Baseball, The Civil War, and The West. Burns has been making documentary films for more than 15 years, beginning with Academy Award-nominated Brooklyn bridge. He is currently directing a series of filmed biographies of remarkable Americans. His book The Civil War, co-written with Geoffrey C. Ward and Ric Burns, is available from Pimlico. burns lives in Walpole, New Hampshire.

GOR001213949
Lewis & Clark: The Corps of Discovery by Ken Burns
Ken Burns
Used - Very Good
Paperback
Vintage Publishing
1998-03-05
288
0712666486
9780712666480
N/A
Book picture is for illustrative purposes only, actual binding, cover or edition may vary.
This is a used book - there is no escaping the fact it has been read by someone else and it will show signs of wear and previous use. Overall we expect it to be in very good condition, but if you are not entirely satisfied please get in touch with us.