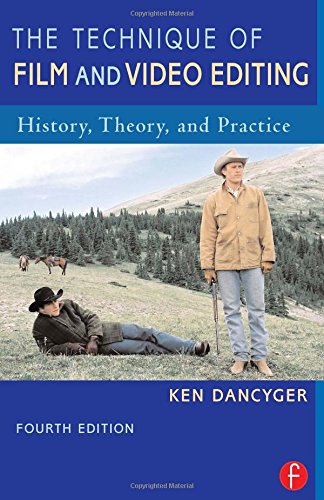 The Technique of Film and Video Editing
by Ken Dancyger (Tisch School of the Arts, New York University, NY, USA)

Used Price
$50.99
inc. GST
Free Shipping in Australia
Provides a detailed, precise look at the artistic and aesthetic principles and practices of editing for both picture and sound. This book puts into context the storytelling choices an editor has to make against a background of theory, history, and practice. It includes examples, analysis, and film stills from movies including "Farenheit 9/11".
Reviews:
Trustpilot
Very Good

The Technique of Film and Video Editing Summary

The Technique of Film & Video Editing provides a detailed, precise look at the artistic and aesthetic principles and practices of editing for both picture and sound. Analyses of photographs from dozens of classic and contemporary films and videos provide a sound basis for the professional filmmaker and student editor. This book puts into context the storytelling choices an editor will have to make against a background of theory, history, and practice. This new edition has been updated to include the latest advances in digital video and nonlinear editing and explores the new trend of documentary as mainstream entertainment, using films such as "Farenheit 9/11" and "The Fog of War" as examples.

Customer Reviews - The Technique of Film and Video Editing

The Technique of Film and Video Editing Reviews

"From D.W. Griffin to MTV, from silent movies to action films, Dancyger explores not only history, techniques, and the social aspects of film and video, but he also looks at how technology has affected film and video making and editing. This isn't a quick read but definitely worthwhile if you want to gain an understanding of what it takes to be an excellent director and editor." -Theano Nikitas, Camcorder & ComputerVideo

"Ken's additions to his book show all of us who love and study the craft of editing, a real understanding of the importance and stimulating impact editing has in helping tell a story, create mood, and shape characters."
--Sam Pollard, film editor, Girl 6, Clockers, Mo Better Blues

"Dancyger's book is an excellent introduction to the art of manipulating moving pictures and sound for students, amateurs, hobbiests and professionals alike." - Videomaker

"...a thoroughly "reader friendly" introduction and survey of proven editing techniques and how those techniques influence the editing process..." - The Bookwatch, Sept. 2006"