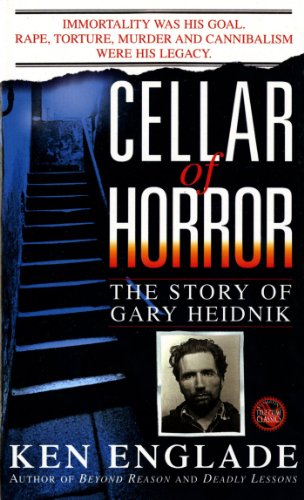 Cellar of Horror
by Ken Englade

Out of Stock
$19.49
inc. GST
A self-proclaimed minister enslaving and raping women in his basement, scattered body parts strewn about the kitchen, a riveting courtroom drama that shocked the city of Philadelphia and horrified the world - this chilling story is difficult to forget.
Very Good
Only 0 left

Cellar of Horror by Ken Englade

Serial killer Gary Heidnik's name will live on in infamy, and his home, 3520 North Marshall Street in Philadelphia, is a house tainted with the memory of unbelievable horrors. What police found there was an incredible nightmare made real. Four young women had been held captive--some for four months--half-naked and chained. They had been tortured, starved, and repeatedly raped. But more grotesque discoveries lay in the kitchen: human limbs frozen, a torso burned to cinders, an empty pot suspiciously scorched...

This is not a story for the faint-hearted. Cellar of Horror is a shocking true account of the self-proclaimed minister with a long history of mental illness, who preyed upon the susceptible and the retarded in a bizarre plan to create his own "baby factory." It is a macabre web spun around money, power, and religion, tangled with courtroom drama and lawyers' tactics, sure to send a chill into your very soul.

"[Englade is] one of the most astute observers of America's wild side." --Bestselling author Jack Olsen

Ken Englade (1938-2016) was an investigative reporter and bestselling author whose books include Beyond Reason, To Hatred Turned, Cellar of Horror, A Family Business, Deadly Lessons, Murder in Boston, and Blood Sister.

GOR001861550
Cellar of Horror by Ken Englade
Ken Englade
Used - Very Good
Paperback
St Martin's Press
2004-05-28
288
0312929293
9780312929299
N/A
Book picture is for illustrative purposes only, actual binding, cover or edition may vary.
This is a used book - there is no escaping the fact it has been read by someone else and it will show signs of wear and previous use. Overall we expect it to be in very good condition, but if you are not entirely satisfied please get in touch with us.