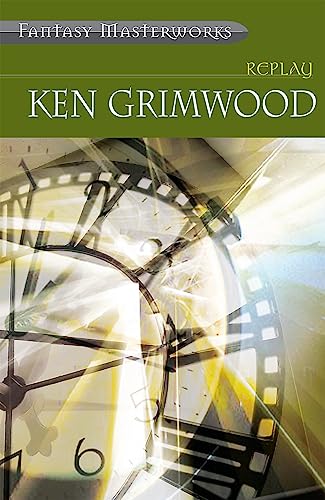 At forty-three Jeff Winston is tired of his low-paid, unrewarding job, tired of the long silences at the breakfast table with his wife, saddened by the thought of no children to comfort his old age. But he hopes for better things, for happiness, maybe tomorrow ... But a sudden, fatal heart attack puts paid to that. Until Jeff wakes up in his eighteen-year-old body, all his memories of the next twenty-five years intact. If he applies those memories, he can be rich in this new chance at life and can become one of the most powerful men in America. Until he dies at forty-three and wakes up in his eighteen-year-old body again ...

In 1986 (seven years before the release of the film Groundhog Day), Grimwood published this riveting novel about a man who dies of a heart attack and then wakes up in his college dorm room 25 years earlier. He discovers that he has the chance to live his life over again. And again. And again. This is one of the most elegant and moving time travels stories ever written. A thrilling adventure that also explores the nature of destiny and the human experience. -- Ernest Cline, author of READY PLAYER ONE
I didn't just love Replay, I believed in it, I dreamed of it ... I also discovered that I wasn't only believer; at the time, there were fan sites dedicated to Replay. Hundreds of people - like the fellow replayers we never realize are out there - were all dreaming my same dream -- Brad Meltzer * You Must Read This *
Powerful ... compelling ... superb! * Atlanta Journal *
Ken Grimwood's Replay is one of the freshest, most engaging novels -- Dean Koontz
The story and writing are terrific and the end is a thoroughly satisfying answer to a great "what if" question -- Bari Wood
I was moved by it greatly * Fantasy Review *
The psychological implications ... are vividly portrayed and his characters are well drawn and sustained * Vector *
Highly successful ... the heart of the tale is the swift sophistication of its unpacking of the great dream * The Encylopedia of Fantasy *

KEN GRIMWOOD (1944-2003) was a radio journalist in California. He was the author of Breakthrough, Elise, The Voice Outside and Into the Deep. He won the World Fantasy Award for Replay.

GOR001318129
Replay by Ken Grimwood
Ken Grimwood
Used - Very Good
Paperback
Orion Publishing Co
2005-05-12
272
0575075597
9780575075597
Winner of World Fantasy Award 1988 (UK) Short-listed for Arthur C. Clarke Award 1988 (UK)
Book picture is for illustrative purposes only, actual binding, cover or edition may vary.
This is a used book - there is no escaping the fact it has been read by someone else and it will show signs of wear and previous use. Overall we expect it to be in very good condition, but if you are not entirely satisfied please get in touch with us.