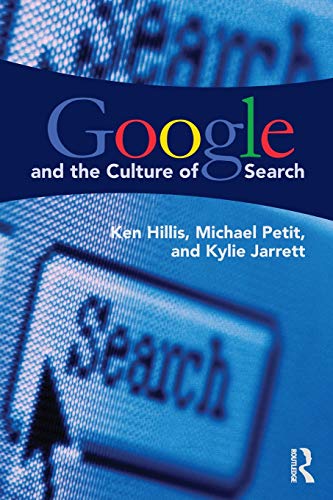 Google and the Culture of Search by Ken Hillis (University of North Carolina, Chapel Hill, USA)

Google and the Culture of Search by Ken Hillis (University of North Carolina, Chapel Hill, USA)

What did you do before Google?

The rise of Google as the dominant Internet search provider reflects a generationally-inflected notion that everything that matters is now on the Web, and should, in the moral sense of the verb, be accessible through search. In this theoretically nuanced study of search technology's broader implications for knowledge production and social relations, the authors shed light on a culture of search in which our increasing reliance on search engines influences not only the way we navigate, classify, and evaluate Web content, but also how we think about ourselves and the world around us, online and off.

Ken Hillis, Michael Petit, and Kylie Jarrett seek to understand the ascendancy of search and its naturalization by historicizing and contextualizing Google's dominance of the search industry, and suggest that the contemporary culture of search is inextricably bound up with a metaphysical longing to manage, order, and categorize all knowledge. Calling upon this nexus between political economy and metaphysics, Google and the Culture of Search explores what is at stake for an increasingly networked culture in which search technology is a site of knowledge and power.

"Some say Google makes us stupid. Others say it should make us worry. Google and the Culture of Search makes us both smarter and more worried about Google's monopoly powers. As Hillis et al. show, Google's lineage runs less to General Motors than to a long line of mathematicians and metaphysicians who wanted to organize the world's information-never before has the strange beast of Google been so clearly put into its proper family tree. Read this book!" -John Durham Peters, University of Iowa

"If you wonder why Google gets billions of search queries every day, and (like me) don't think 'because it's free' or 'because it's there' are sufficient answers, you should read this book. It's a treasure trove of insights into the culture of search." -Viktor Mayer-Schoenberger, Oxford Internet Institute

"The strength of this work lies in its copious and meticulous detail, which provides a firm basis for the authors' arguments. Hillis, Petit, and Jarrett take the reader on a historical journey through the intertwined ideas of knowledge automation and the search for truth, conveying the reader through the philosophical roots of Atomism and Neo-Platonism, to pan-psychic visions of a universal library and HiveMind, and culminating at the relatively modern depictions of aWorld Brain and Universal Electronic Library." - Kelly Quinn, University of Illinois at Chicago, USA

Ken Hillis is Professor of Media and Technology Studies in the Department of Communication Studies at the University of North Carolina at Chapel Hill. He is author of Digital Sensations: Space, Identity and Embodiment in Virtual Reality (1999) and Online a Lot of the Time: Ritual, Fetish, Sign (2009). He is co-editor of Everyday eBay: Culture, Collecting and Desire (2006). Michael Petit is Director of Media Studies and the Joint Program in New Media at the University of Toronto Scarborough. He is author of Peacekeepers at War (1986) and co-editor of Everyday eBay: Culture, Collecting and Desire (2006). Kylie Jarrett is Lecturer in Multimedia at the National University of Ireland Maynooth where she is the program coordinator of the BA Digital Media.

1. Growing Up Google 2. Metaphysics of Search 3. The Searcher and the Self 4. Search Critic 5. Conclusion: "I Search, Therefore I Am"