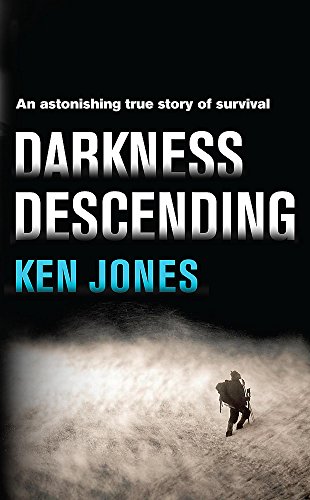 Used Price
$20.99
inc. GST
Free Shipping in Australia
On 5 January 2003, former Special Forces soldier Ken Jones was caught in a devastating avalanche as he climbed in the frozen wilderness of the Transylvanian Alps. Heavily frostbitten and bleeding internally, Ken dragged himself to safety over three agonizing days only to discover that his true ordeal had yet to begin.
Reviews:
Trustpilot
Very Good Good Well Read

On 5 January 2003, former Special Forces soldier Ken Jones was caught in a devastating avalanche as he climbed in the frozen wilderness of Romania's Transylvanian Alps. Flung from a cliff, he regained consciousness to find himself shrouded in darkness, separated from his supplies, suffering from overexposure in the sub zero-temperatures and in horrendous pain from a broken leg and shattered pelvis. Heavily frostbitten and bleeding internally, Ken dragged himself to safety over three agonizing days only to discover that his true ordeal had yet to begin.

His account of life saving surgery and his battle to walk again is a classic tale of triumph over adversity and what it means to never give up. Heart stopping and inspiring to the very last page, Ken Jones's story of endurance and survival is an unforgettable testament to the strength of the human spirit.

'Gripping' Daily Telegraph. * Daily Telegraph *
'Battered by two avalanches, lost and suffering injuries that should have killed him, it became the defining challenge of his life. Ten years on, still haunted by the experience, he has written a gripping new book about his terrifying fight for survival' Mail on Sunday. * Mail on Sunday *
'Riveting. Knife-edge suspenseful. Uplifting beyond measure. Takes the spirit of Special Forces soldiering to new levels - showing how those who dare can survive the seemingly unsurvivable in one of the toughest environments on earth' Damien Lewis. * Damien Lewis *

Ken Jones is from Shropshire. He is a former soldier who served with the Parachute Regiment and various elements of UK Special Forces. Ken is the founder of Avalanche Endurance Events and Race Director of The Fan Dance Race Series Special Forces challenge. He is also a motivational speaker, an avid outdoorsman, mountaineer, competitive road cycle racer and keen chess player. Ken lives between Lucca, Italy, San Diego California and the Elan Valley, Wales.

GOR006134065
Darkness Descending by Ken Jones
Ken Jones
Used - Very Good
Paperback
Quercus Publishing
2014-11-06
320
1782066020
9781782066026
N/A
Book picture is for illustrative purposes only, actual binding, cover or edition may vary.
This is a used book - there is no escaping the fact it has been read by someone else and it will show signs of wear and previous use. Overall we expect it to be in very good condition, but if you are not entirely satisfied please get in touch with us.