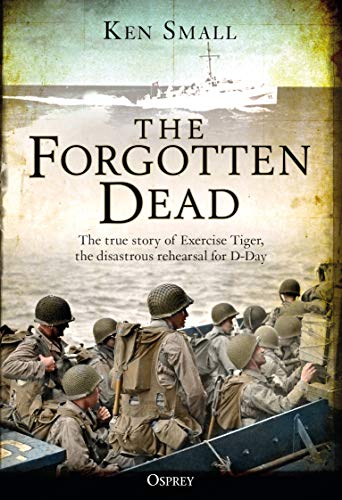 The Forgotten Dead
by Ken Small

Used Price
$22.49
inc. GST
Free Shipping in Australia
Bestselling true story of the fiasco of the D-Day landings exercise in Devon in 1944 in which over 1,000 soldiers were killed
Very Good

The Forgotten Dead: The true story of Exercise Tiger, the disastrous rehearsal for D-Day by Ken Small

27 April 1944. Exercise Tiger. German E-boats intercept rehearsals for the D-Day landings... On a dark night in 1944, a beautiful stretch of the Devon coast became the scene of desperate horror. Tales began to leak out of night-time explosions and seaborne activity. This was practice for Exercise Tiger, the main rehearsal for the Utah Beach landings... This fiasco, in which nearly 1,000 soldiers died, was buried by officials until it was almost forgotten. That is, until Ken Small discovered the story, and decided to dedicate the rest of his life to honouring the brave young men who perished in the disastrous exercise. Pulling a Sherman tank from the seabed, Ken created a memorial to those who died and started to share their story, and his, with the world. This updated edition of a bestselling classic is a gripping tale of wartime disaster and rescue in the words of the soldiers who were there, and of one man's curiosity that turned into a fight to ensure that they would never be forgotten.

Inspiring and moving * Warships International Fleet Review *
I wholeheartedly recommend this book. It had me gripped, entertained and informed from the first to the last page. * Warship World *

Ken Small first discovered the existence of Exercise Tiger after he took up beachcombing in 1969. From there, Ken dedicated the next 35 years of his life to honouring the young men who perished in the disastrous exercise. Pulling a Sherman tank from the seabed, Ken created a memorial to those who died and started to share their story, and his, with the world. The Forgotten Dead was originally published in 1988, bringing both Exercise Tiger and Ken's efforts to light. Ken sadly passed away in 2004 after a long struggle with cancer. Today, people from all over the world travel to Torcross to see Ken's tank and remember the tragedy of Exercise Tiger. Mark Rogerson is a communications specialist and former BBC television journalist. As well as collaborating with Ken Small on The Forgotten Dead, he is the author of Home Banking - A Commercial Proposition? (Lafferty Publications), one of the first examinations of the impact of technology on branch banking and The Dali Scandal (Gollancz), an investigation into the billion dollar world-wide trade in fakes of the Spanish surrealist's work. He lives in southwest France.

GOR009303397
The Forgotten Dead: The true story of Exercise Tiger, the disastrous rehearsal for D-Day by Ken Small
Ken Small
Used - Very Good
Paperback
Bloomsbury Publishing PLC
2018-06-28
256
1472834496
9781472834492
N/A
Book picture is for illustrative purposes only, actual binding, cover or edition may vary.
This is a used book - there is no escaping the fact it has been read by someone else and it will show signs of wear and previous use. Overall we expect it to be in very good condition, but if you are not entirely satisfied please get in touch with us.