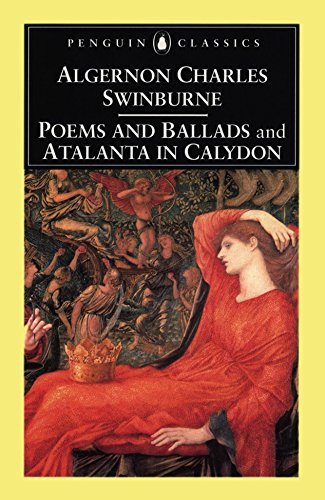 Poems and Ballads & Atalanta in Calydon by Kenneth Haynes

Brings together the author's poetic works, "Atalanta in Calydon" (1865) and "Poems and Ballads" (1866). This volume includes notes on poems and reviews.

Poems and Ballads & Atalanta in Calydon by Kenneth Haynes

Algernon Swinburne (Author)
Algernon Charles Swinburne was born in 1837 of an aristocratic family connected to Northumberland. He was educated for a time at Eton (where he may have developed his fascination with flagellation) and later matriculated at Balliol College, Oxford. There he met and formed lasting friendships with Pre-Raphaelite artists and writers, including William Morris, Edward Burne-Jones and Dante Gabriel Rossetti. Over the next few years, he travelled in France and Italy, wrote many poems, and led a Bohemian life in London. He lived for a time in Tudor House, with Rossetti. Under the influence of the death of his sister, the end of his romantic attachment to his cousin Mary Gordon, and the collapse of the Tudor House household and his strained friendship with Rossetti, Swinburne wrote Atalanta in Calydon, published in 1865, the work that first brought him critical notice; Tennyson praised it highly. Poems and Ballads appeared in the next year and brought sensational success and the angry attention of critics who were outraged by its choice of topics (sadomasochism, lesbianism, necrophilia, and the rejection of Christianity).

His behaviour and bouts of drinking became worse, and he was often rescued by his family. Eventually, in 1879, he was taken to live with his friend Theodore Watts (later Watts-Dunton) in Putney, under whose watchful eye Swinburne's health improved and drinking ceased. Many more volumes of poetry followed, including the second and third series' of Poems and Ballads (1878 and 1889) and Tristram of Lyonesse (1882). In addition, he published many dramas and works of literary criticism. He wrote in a wide variety of literary forms, from classical verse styles to medieval and Renaissance genres, from burlesques to ballads and roundels, and had a large influence on early Modern poets. Swinburne lived in comparative seclusion with Watts-Dunton at The Pines, Putney, until his death in 1909.

GOR006554944
Poems and Ballads & Atalanta in Calydon by Kenneth Haynes
Kenneth Haynes
Used - Very Good
Paperback
Penguin Books Ltd
2000-08-31
464
0140422501
9780140422504
N/A
Book picture is for illustrative purposes only, actual binding, cover or edition may vary.
This is a used book - there is no escaping the fact it has been read by someone else and it will show signs of wear and previous use. Overall we expect it to be in very good condition, but if you are not entirely satisfied please get in touch with us.
Trustpilot