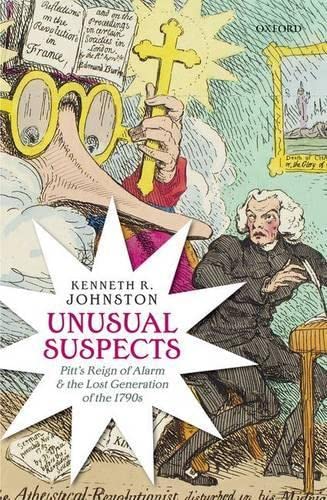 Unusual Suspects: Pitt's Reign of Alarm and the Lost Generation of the 1790s by Kenneth R. Johnston (Kenneth Johnston is Ruth N. Halls Professor of English Emeritus at Indiana University)

Robespierre's Reign of Terror spawned an evil little twin in William Pitt the Younger's Reign of Alarm, 1792-1798. Terror begat Alarm. Many lives and careers were ruined in Britain as a result of the alarmist regime Pitt set up to suppress domestic dissent while waging his disastrous wars against republican France. Liberal young writers and intellectuals whose enthusiasm for the American and French revolutions raised hopes for Parliamentary reform at home saw their prospects blasted. Over a hundred trials for treason or sedition (more than ever before or since in British history) were staged against 'the usual suspects' - that is, political activists. But other, informal, vigilante means were used against the 'unusual suspects' of this book: jobs lost, contracts abrogated, engagements broken off, fellowships terminated, inheritances denied, and so on and on. As in the McCarthy era in 1950s America, blacklisting and rumor-mongering did as much damage as legal repression. Dozens of 'almost famous' writers saw their promising careers nipped in the bud: people like Helen Maria Williams, James Montgomery, William Frend, Gilbert Wakefield, John Thelwall, Joseph Priestley, Dr. Thomas Beddoes, Francis Wrangham and many others. Unusual Suspects tells the stories of some representative figures from this largely 'lost' generation, restoring their voices to nationalistic historical accounts that have drowned them in triumphal celebrations of the rise of English Romanticism and England's ultimate victory over Napoleon. Their stories are compared with similar experiences of the first Romantic generation: Coleridge, Wordsworth, Southey, Lamb, Burns, and Blake. Wordsworth famously said of this decade, 'bliss was it in that dawn to be alive, but to be young was very heaven!' These young people did not find it so-and neither, when we look more closely, did Wordsworth.

No one before Johnston has understood the poetry of the Romantic period so centrally in the context of Pittas alarm ... This fascinating book is one way of thinking afresh about the huge damage a tyranny such as Pittas can do, not just to a generation of writers, but to the development of a whole culture. * John Barrell, London Review of Books *
Johnston has written a book that is part investigative history and part elegy ... a story that has waited a long time to be told. We might think of Unusual Suspects as a cross between William Hazlittas The Spirit of the Age and E.P. Thompsonas The Making of the English Working Class: group biography meets radical history. * Times Literary Supplement *
The great strength of Johnston's approach is its breadth and accessibility. To provide such a rich tableau of the 1790s and its writers and thinkers, both known and unknown, in only four hundred or so pages is a remarkable achievement. Unusual Suspects is a profoundly useful book for every student of the period, at whatever level of accomplishment; if it does not fundamentally change the way we view and teach the period, it should. * Elias Greig, BARS Review *
The book's greatest contribution is to show how the reign of alarm shaped the ideas and writing of these extraordinarily talented writers. That many of them are now scarcely known even to literary academics reinforces one of Johnston's recurrent points ... that this reign not only caused the ruin of personal lives and the deferral of political reforms but also hampered the genesis of great literature, including Romanticism itself ... Johnston tells a good story in a prose style self-consciously American and more colloquial than one usually finds in academic writing. * Michael Scrivener, New Books on Line *
A study of huge scope and persuasive argument which will be of benefit to literary scholars and historians alike. * Mary Fairclough, Literature and History *
A new thorough-going treatment of a whole generation ... written with attractive informality of style ... that all students of the period will find themselves raiding for its judicious narration of ways in which texts of all kinds participate in and do not merely respond to political change. * European Romantic Review *
A deeply moving book ... reveals the appalling extent to which William Pitt's Reign of Alarm impacted upon the history of Romanticism during the 1790s ... providing overwhelming evidence that innumerable writing careers were brought to a shuddering halt in the 1790s ... a wonderful resource for these lost writers. * Review of English Studies *
Generally ... when academics try to write for a broader, popular audience, we fail ... because we try too hard. But not Kenneth Johnston [who] has been developing [his] style since writing The Hidden Wordsworth ... a style charged with moral urgency ... that is not so much popular as populist ... his model is the writings of a usual suspect, mentioned often in the book: Thomas Paine. * Bruce Graver, The Age of Johnson *
[An] exceptional study ... an invaluable resource to students of Romanticism. * Tim Whelan, The Coleridge Bulletin *
engaging ... the sheer amount of material covered never feels overwhelming ... this is an important resource on a wide range of liberal thinkers of the late eighteenth century ... [and] it deserves a place on the bookshelf of any scholar interested in the literature of the French revolutionary period. * Stephanie Russo, Eighteenth Century Fiction *

Kenneth R. Johnston received his PhD from Yale University and spent his entire academic career at Indiana University, where he was honored for distinguished teaching and scholarly achievement, while also heading its Department of English. He is author of Wordsworth and 'The Recluse' and The Hidden Wordsworth: Poet, Lover, Rebel, Spy, and editor of Romantic Revolutions. The Hidden Wordsworth won the 1999 Barricelli Prize for outstanding contribution to Romantic studies, and was named to several Book of the Year lists in both UK and US. He now resides in Chicago.

I. THE RED DECADE ; II. THE FORCES OF PUBLIC OPINION ; III. KEEPING THE UNIVERSITY AND CHURCH SAFE FROM REFORM ; IV. OTHER VOICES, OTHER PLACES ; V. END-GAMES ; VI. THE ROMANTIC POETS AND THE POLICE