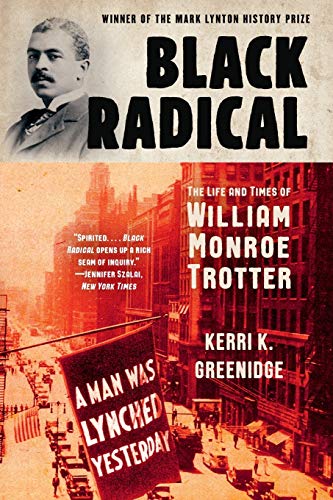 The award-winning biography that restores William Monroe Trotter to his essential place next to Douglass, Du Bois, and Malcom X in the pantheon of American civil rights heroes.

Black Radical reclaims William Monroe Trotter (1872-1934) as a seminal figure whose prophetic yet ultimately tragic-and all too often forgotten-life offers a link from Frederick Douglass to Black Lives Matter. Kerri K. Greenidge renders the drama of turn-of-the-century America, showing how Trotter, a Harvard graduate, a newspaperman and an activist, galvanized black working-class citizens to wield their political power despite the virulent racism of post-Reconstruction America. Situating his story in the broader history of liberal New England to "satisfying" (Casey Cep, The New Yorker) effect, this magnificent biography will endure as the definitive account of Trotter's life, without which we cannot begin to understand the trajectory of black radicalism in America.
"Kerri K. Greenidge's spirited biography [is] an ardent and mostly approving account of Trotter's life that nevertheless conveys the more vexing elements of his personality.... Black Radical opens up a rich seam of inquiry that persists to this day, about the tug-of-war between reformers and radicals, and whether victories that seem purely symbolic at first can ripple out into real-world effects later on." -- Jennifer Szalai, New York Times ("Times Critics Top Books of 2019")
"[Trotter's] legacy presents a challenge to those who seek change today: is compromise a necessary evil of any social movement, or is it the original sin of collective action? Greenidge argues that [his] protests, dismissed by many people at the time as publicity-seeking stunts, are Trotter's real legacy.... One of the most satisfying accomplishments of Black Radical is the way that Greenidge situates Trotter's biography in the broader story of liberal New England. Boston, Greenidge reminds her readers, incubated the politics of Malcolm X and of the Reverend Martin Luther King, Jr., not to mention the writers Pauline Hopkins and Dorothy West." -- Casey Cep, The New Yorker
"In this engagingly written biography, historian Kerri Greenidge has penned a volume that provides a penetrating view of William Monroe Trotter's radical thought and remarkable life. Black Radical incisively explores Trotter's thirty years of editing and publishing the Guardian and brilliantly traces his influence on the emergence of "radical black consciousness at the turn of the twentieth century." Moreover, this volume provides a detailed and compelling portrait of African American life in Boston; accessible to all readers, Greenidge's new book is a valuable addition to the literature." -- Henry Louis Gates, Jr., Alphonse Fletcher University Professor, Harvard University
"This engaging account of the life of William Monroe Trotter reclaims the vital work of an unsung activist and the complex reality of the long civil rights movement. Black Radical reminds us that the historic fight against racial violence and injustice was as Northern as it was Southern, as renegade as it was reformist. An important book and a rich chronicle of the past with urgent lessons for today." -- Alondra Nelson, author of Body and Soul
"William Monroe Trotter was not only present at the creation of the modern civil rights movement, Kerri Greenidge's welcome biography establishes that by his visionary militancy and selfless financial support Trotter merits reconsideration as progenitor of the movement. A major addition to the literature." -- David Levering Lewis, Pulitzer prize-winning author of W. E. B. DuBois, Volumes 1 and 2
"Kerri Greenidge has created the rare book where the actual writing is as exquisite as the stunning research. Black Radical offers a lush layered story and a blueprint for liberation." -- Kiese Laymon, author of Heavy: An American Memoir
Kerri K. Greenidge is Mellon Assistant Professor in the Department of Studies in Race, Colonialism, and Diaspora at Tufts University, where she also directs the American studies program. She lives in Massachusetts.
GOR011229778
9781631498756
1631498754
Black Radical: The Life and Times of William Monroe Trotter by Kerri K. Greenidge (Tufts University)
Kerri K. Greenidge (Tufts University)
Used - Very Good
Paperback
WW Norton & Co
2021-01-12
432
N/A
Book picture is for illustrative purposes only, actual binding, cover or edition may vary.
This is a used book - there is no escaping the fact it has been read by someone else and it will show signs of wear and previous use. Overall we expect it to be in very good condition, but if you are not entirely satisfied please get in touch with us
Trustpilot