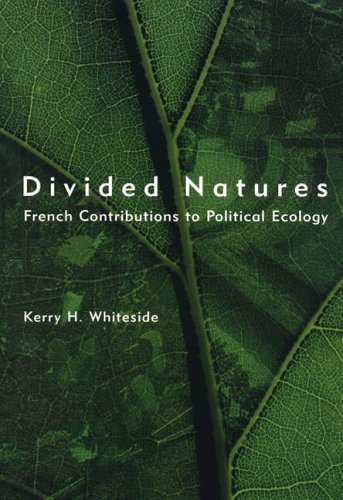 Out of Stock
$22.49
inc. GST
A study of French political ecologists and the potential of their work to broaden the scope of English-language ecological theory.
Very Good
Only 0 left

Much of the theory written in English is shaped by the debate between anthropocentric ecologists, who contend that the value of our nonhuman surroundings derives from their role in fulfilling human interests, and ecocentric ecologists, who contend that the nonhuman world holds ultimate value in and of itself. This debate is almost nonexistent among French theorists, who tend to focus on the processes linking nature and human identity. Whiteside suggests that the insights of French theorists could help English-language theorists to extricate themselves from endless debates over the real center of nature's value.

Every so often, a work comes along that is so timely...and this book is one such work.

GOR010403306
Divided Natures: French Contributions to Political Ecology by Kerry H. Whiteside
Kerry H. Whiteside
The MIT Press
Used - Very Good
Paperback
MIT Press Ltd
2002-02-01
335
0262731479
9780262731478
N/A
Book picture is for illustrative purposes only, actual binding, cover or edition may vary.
This is a used book - there is no escaping the fact it has been read by someone else and it will show signs of wear and previous use. Overall we expect it to be in very good condition, but if you are not entirely satisfied please get in touch with us.