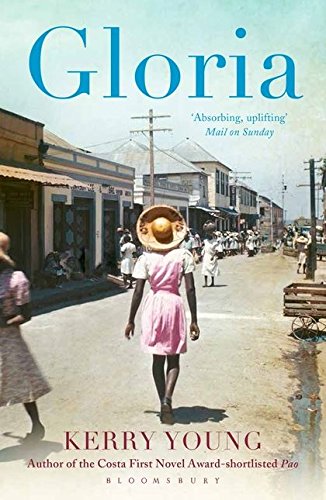 Jamaica, 1938. Gloria Campbell is sixteen years old when a single violent act changes her life forever. She and her younger sister flee their hometown to forge a new life in Kingston. As all around them the city convulses with political change, Gloria's desperation and striking beauty lead her to Sybil and Beryl, and a house of ill-repute where she meets Yang Pao, a Kingston racketeer whose destiny becomes irresistibly bound with her own. Sybil kindles in Gloria a fire of social justice which will propel her to Cuba and a personal and political awakening that she must reconcile with the realities of her life, her love of Jamaica and a past that is never far behind her. Set against the turbulent backdrop of a country on the cusp of a new era, Gloria is an enthralling and illuminating story of love and redemption.

Kerry Young is a stand alone talent in the new emerging generation of writers from the Caribbean region. Her stories are gritty and also funny and very real. Read her if you want to know about the Caribbean. Kerry Young is unique * Monique Roffey, winner of the OCM BOCAS Prize for Caribbean Literature *
Gloria is a brilliant, observant, sometimes complex read, but with clear and simple messages, it speaks to the feminist and equal rights campaigner in all of us ***** * Western Mail *
A very authentic portrayal of a woman's lot in 1950s, 1960s Jamaica. I fell in love with Gloria and was turning over the pages rapidly, willing her to conquer her situation. A triumph * Alex Wheatle, author of Brenton Brown *
Impressive ... With grace, authenticity and humour, Young lets Jamaica's political history shine through the life story of her charming yet fallible hero. Brilliant * Daily Mail on Pao *
A vivid portrayal ... Kerry Young's heartfelt, sparky and affecting debut novel is a chronicle of multicultural Jamaica, both in its cultural richness and in its strife and tensions * Guardian *
A pacy but absorbing saga of domestic struggle and gangland manoeuvring set against the violent backdrop of postwar Jamaican politics * Independent on Sunday *
Kerry Young tells the absorbing, uplifting story of a young woman's escape from the brutal poverty of rural Jamaica to a new life in the violent world of its capital, Kingston ... Written in the gentle, hypnotic patois and encompassing the birth pangs of Jamaican independence, this is a highly evocative portrait of a country in transition, and of one woman's search for self-awareness and self-respect * Mail on Sunday *

Kerry Young was born in Kingston, Jamaica, to a Chinese father and a mother of mixed Chinese-African heritage. She came to England in 1965 and lives in Leicestershire. www.kerryyoung.co.uk

GOR010677109
Gloria by Kerry Young
Kerry Young
Used - Like New
Paperback
Bloomsbury Publishing PLC
2014-04-10
400
1408843366
9781408843369
N/A
Book picture is for illustrative purposes only, actual binding, cover or edition may vary.
The book has been read, but looks new. The book cover has no visible wear, and the dust jacket is included if applicable. No missing or damaged pages, no tears, possible very minimal creasing, no underlining or highlighting of text, and no writing in the margins.