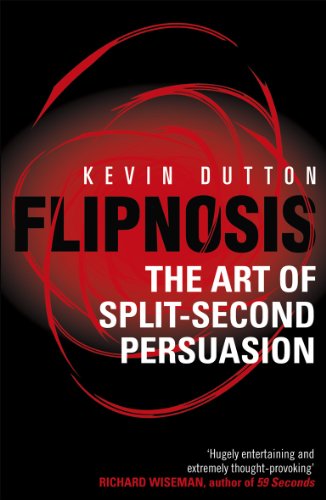 In Stock
$11.49
+10% GST
'What if I were to tell you that a psychopathic arsonist might also be the person most likely to save you from a burning building?'*This book is about a special kind of persuasion: 'flipnosis'.
Very Good Good Well Read
5 in stock

Flipnosis: The Art of Split-Second Persuasion by Kevin Dutton

'What if I were to tell you that a psychopathic arsonist might also be the person most likely to save you from a burning building?' *This book is about a special kind of persuasion: 'flipnosis'. It has an incubation period of just seconds, and can instantly disarm even the most discerning mind. Flipnosis is black-belt mind control. It doesn't just turn the tables, it kicks them over. *From the malign but fascinating powers of psychopaths, serial killers and con men to the political genius of Winston Churchill - via the grandmasters of martial arts, Buddhist monks, magicians, advertisers, salesmen, CEOs and frogs that mug each other - Kevin Dutton's brilliantly original and revelatory book explores what cutting-edge science can teach us about the techniques of persuasion.

"Hugely entertaining and extremely thought-provoking" * Richard Wiseman, author of Quirkology *
"So mind-alteringly brilliant that I'm amazed it hasn't been made illegal" -- Howard Marks
"Kevin Dutton is not the Messiah. But he's got a whole bunch of stories and parables that shed new light on how we are persuaded." -- Terry Jones and Michael Palin
"Brilliant . . . Kevin Dutton is simply a genius. I now tell his stories as if they were my own" -- Andy McNab
"[A] wide-ranging and entertaining tour of the science of persuasion and influence . . . exposing, along with many other wonders, just how many scientists are currently at work in the shadowy territories of human personality, psychological improvement and, essentially, mind control" * The Sunday Times *

Dr Kevin Dutton is a researcher at the Department of Experimental Psychology, University of Oxford, and a member of the Oxford Centre for Emotions and Affective Neuroscience (OCEAN) research group. He regularly publishes in leading international scientific journals and speaks at conferences around the world. Flipnosis is his first book.

GOR002637571
Flipnosis: The Art of Split-Second Persuasion by Kevin Dutton
Kevin Dutton
Used - Very Good
Paperback
Cornerstone
2011-03-03
400
0099505622
9780099505624
N/A
Book picture is for illustrative purposes only, actual binding, cover or edition may vary.
This is a used book - there is no escaping the fact it has been read by someone else and it will show signs of wear and previous use. Overall we expect it to be in very good condition, but if you are not entirely satisfied please get in touch with us.