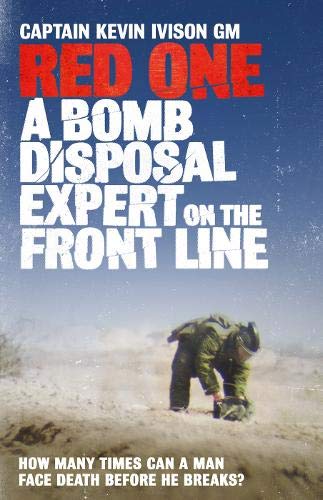 Red One
by Kevin Ivison

Red One: A Bomb Disposal Expert on the Front Line by Kevin Ivison

This is the gripping true story of a young bomb disposal officer and his terrifying experiences in Iraq facing daily rocket attacks and terrorist bombs. When two of his colleagues are killed by a roadside bomb, Kevin Ivison is called in to defuse a second even deadlier bomb just a hundred yards from the bodies of his friends. To make things worse, the entire area is under fire from snipers, and a crowd of angry Iraqis have begun to hurl petrol bombs...
With little chance of living through this impossible task, Kevin leaves final messages for his loved ones and sets out alone towards the bomb that he is sure will be the last thing he sees.
In this gut-wrenching tale of heroism and survival, Kevin Ivison explains why he chose to be a bomb disposal expert in the first place, how he found the courage to face his death, and the unendurable stress that has given him nightmares ever since.

gripping... a gifted writer as well as a genuine hero... I am humbled at what these heroes do for us all -- Nigel Jones * LITERARY REVIEW *
The honesty with which Kevin relays his fear, his overwhelming sense that he is going to die, is impressive.. Ivison's writing is unpretentious and accessible -- Patrick Hennessey * THE DAILY TELEGRAPH *
Red One is plain-spoken, hearth-thumping stuff -- Sam Kiley * THE TIMES *
The chapters of Red One that cover the events of February 28 are as gripping, agonising and memorable as any modern military memoir -- Brian Schofield * THE SUNDAY TIMES *
(An) absorbing book...At the heart of the book is a taut, riveting account of the events of a single day - February 28, 2006 - when Ivison rushed to the scene of an IED ambush on a road known as Red One -- Philip Jacobson * DAILY MAIL *
Capt Ivison's bravery in the face of...deadly situations is recounted in colourful detaili in Red One -- Stephen Tyler * SOLDIER *
Absoluteley riveting...once opened it was a hard one to put down...Highly recommended * COMBAT & SURVIVAL *

Captain Kevin Ivison, GM, was commissioned into the army in 2000, and served in Afghanistan, Bosnia, Kosovo, Northern Ireland and Iraq, where his work as a bomb disposal expert won him the George Medal. Since leaving the army in April 2009 he has been working for the Ministry of Defence.

GOR002279455
Red One: A Bomb Disposal Expert on the Front Line by Kevin Ivison
Kevin Ivison
Used - Very Good
Hardback
Orion Publishing Co
2010-08-01
256
0297860550
9780297860556
N/A
Book picture is for illustrative purposes only, actual binding, cover or edition may vary.
This is a used book - there is no escaping the fact it has been read by someone else and it will show signs of wear and previous use. Overall we expect it to be in very good condition, but if you are not entirely satisfied please get in touch with us.