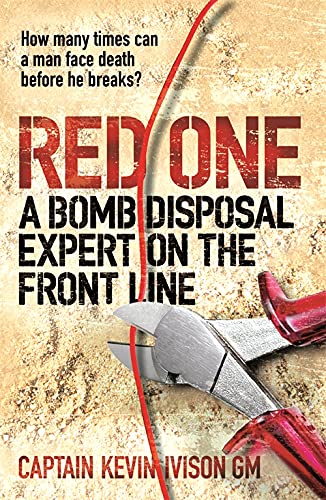 Red One by Kevin Ivison

The bestselling true story of bomb disposal work that won Ivison a George Medal - and started a living nightmare...

Red One: A Bomb Disposal Expert on the Front Line by Kevin Ivison

The British Hurt Locker. In the Iraq War, Cpt Kevin Ivison defused bombs and IEDs left by the Taliban. Each time he took the 'longest walk' to a bomb, it could have been his last. How many times can a man stare death in the face before he breaks?

Even the most skilful operators can only roll the dice so many times before they get unlucky . . . This was my bomb, my task and my fate alone. There was nothing left to do but walk.

When two of his colleagues are killed by a roadside bomb in Iraq, young bomb disposal officer Kevin Ivison is called in to defuse a second, even deadlier bomb just a hundred yards from the bodies of his friends. To make things worse, the entire area is under fire from snipers, and a crowd of angry Iraqis have begun to hurl petrol bombs...

With little chance of living through this impossible task, Kevin leaves final messages for his loved ones and sets out alone towards the bomb that he is sure will be the last thing he sees. In this gut-wrenching and terrifying true story of heroism and survival, Kevin Ivison explains why he chose to be a bomb disposal expert in the first place, how he found the courage to face his death, and the unendurable stress that has given him nightmares ever since.

An absorbing, honest, true story of life on the front lines in the Iraq War. Perfect for fans of The Hurt Locker, Sniper One and Bomb Hunters.

'The honesty with which Kevin relays his fear, his overwhelming sense that he is going to die, is impressive . . . unpretentious and accessible' Daily Telegraph

'Absorbing ... At the heart of the book is a taut, riveting account of the events of a single day - February 28, 2006 - when Ivison rushed to the scene of an IED ambush on a road known as RED ONE' - DAILY MAIL

'RED ONE is plain-spoken, heart-thumping stuff' - THE TIMES